Jeff VanderMeer and myself will be reading tomorrow (Dec 1st) at Between Books, in Claymont DE at 7 pm -- details here.

On Thursday, December 3rd, Jeff Ford and I will be reading at the Eagle Theatre in Hammonton at 7:30 pm.
Posted by Fish Monkey at 11:41 PM No comments:

Fashion photography -- as it should be

I've been kind of over fashion magazines lately -- especially Vogue, which I used to love a lot a few years back. But now, the disconnect between the mags and the world had become jarring: fashion has been increasingly treated as aspirational rather than artistic, and I find the former a lot more difficult to stomach -- and so does most everyone who is not an eighteen-year-old millionaire, I would imagine. Anne Leibovitz, who has been responsible for so many of Vogue's photoshoots, is a genius, but despite that I have been dissatisfied with the US Vogue lately.

Until now. Leibovitz has produced a wonderful, terrifyingly grim and yet hilarious fairy tale themed photoshoot, a sort of twisted Hansel and Gretel (not that the original wasn't twisted, but you know what I mean). With Lady Gaga as a witch: 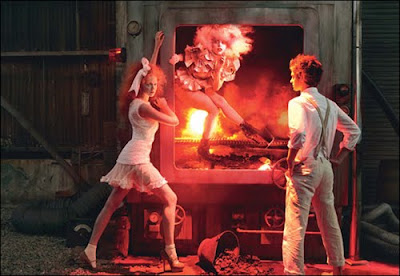 I find this one both charming and funny, as well as the rest of the pictures. I am especially taken with these two: 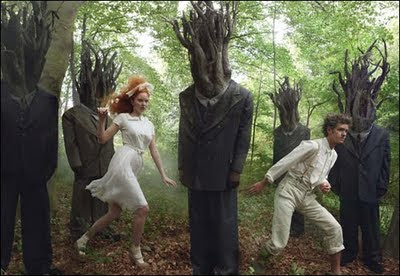 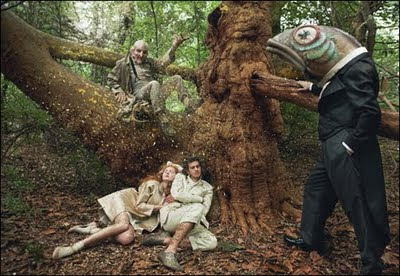 And fish people (the latter, of course, reminds me of that Klee painting). In any case -- very well done, Vogue. Sure, the clothes are still ridiculously expensive, but I enjoy the playfulness and the creativity that went into these pictures. The composition is genius, and they remind me once again what fashion photography can (and ought to) be -- artistic expression, telling of tales, playful reminders that fashion (and clothes) is not about status or trends or any other foolishness. It's an artistic medium that inspires rather dictates, and elevates rather than demeans.

[This is via Haute Macabre. Check out the rest of the pictures there.]
Posted by Fish Monkey at 5:29 PM No comments:

So WFA won by PAPER CITIES came in the mail today. It was adored: 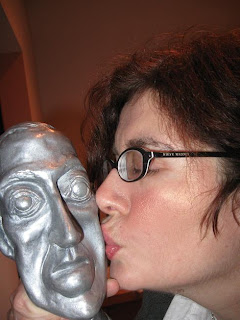 And placed in its new surroundings, where it fit right in: 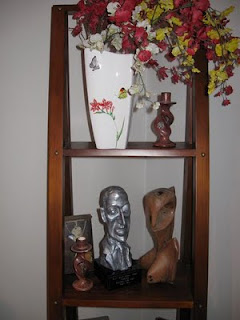 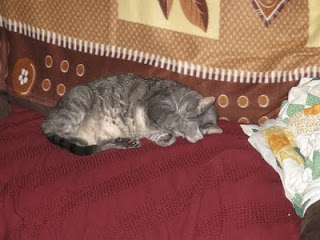 (She later woke up and attempted to eat a packing peanut. It was an exciting day for everyone.)
Posted by Fish Monkey at 4:41 PM 1 comment:

1. I will be heading home for the holidays! Very excited about that -- we'll be in Moscow for two weeks, late December to early January.

2. This month, I'll be in NYC. NYC people, let me know what day would be good/if you want to get together for food.

After Christopher did his normal poor farmboy who was not given many opportunities blah blah speech, he suddenly decided that he's a weird and wacky guy. Then he made the same silhouette he made every darn week.

He was inspired by algae on the rock. Look, my undergraduate concentration was in Algology and Mycology, I love algae. They are beautiful: 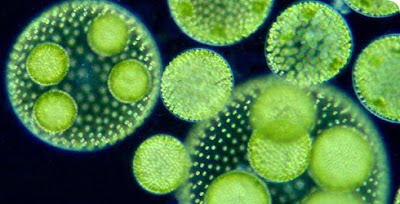 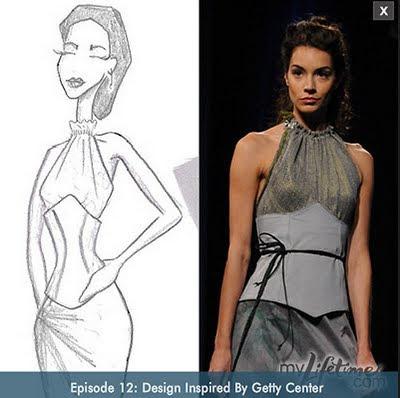 Doesn't do them justice. The top part would be ok if it wasn't the exact copy of his previous 'vampire bride' outfit. The green splotch is just weird. So Christopher cried and was finally kicked off. The only mystery was how did he hold on for so long.

Althea's outfit, inspired by the architecture of the Getty Center, was not very well made. Heidi called it a mess-fest, and she was not wrong: 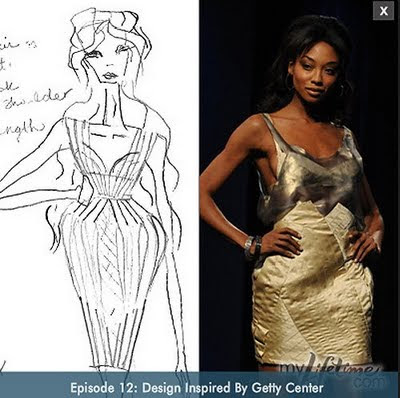 But because she took a risk and based on her past performance, she was welcomed as one of the top three.

Meanwhile, Gordana got inspired by a Monet painting of a Gothic cathedral. Her dress was amazing: 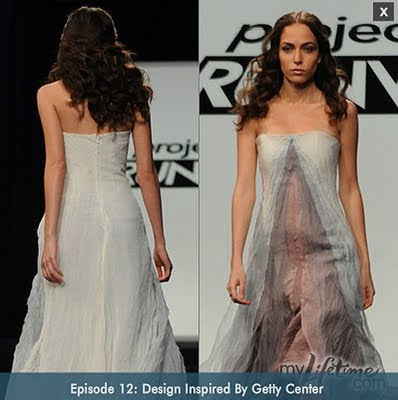 Even Heidi had to agree, and the rest of the judges grudgingly admitted that yes, it was her best outfit yet. Did Gordana get to go to Bryant Park? Don't be silly, of course not. Nina Garcia thoughtfully said that she still didn't know who Gordana was as a designer. I suspect that Ms. Garcia's frequent absences had more to do with that than Gordana's style, and that those who watched the show know who she is as a designer -- she values simplicity and classic silhouettes that are lifted from being ordinary by their exquisite workmanship and amazing detailing. You would think that people in fashion industry would be able to recognize that. 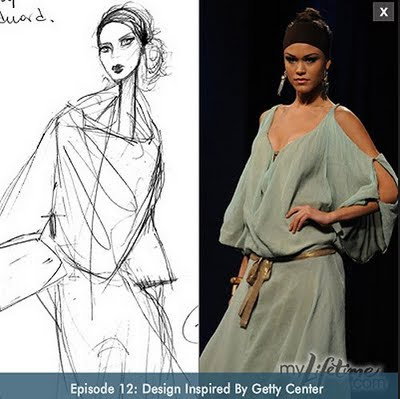 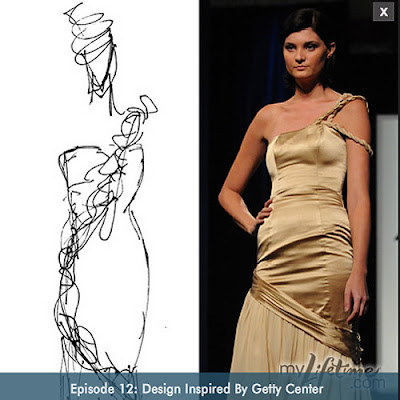 They both got to go to fashion week. I'm not unhappy about the final three, but I do feel bad for Gordana: along with being treated terribly for the entire season, she didn't get to go to Bryant Park even though her dress was clearly the best in the bunch.
Posted by Fish Monkey at 11:35 AM No comments:

I was lucky enough to read THE SAD TALE OF THE BROTHER GROSSBART by Jesse Bullington back in September; now that the book is officially released, I would like to encourage everyone to buy a copy. It is actually very, very good.

As you might've heard, the book is bloody and grim, the protagonists have no redeeming qualities apart from their heretical and often hilarious theological views, and people get murdered left and right. This is not why this book is good, and not even because of its Terry Gilliam-esque Medieval mud and grime, although that one is delightful. I recommend it because it does such a wonderful job capturing that fevered worldview, apparently common in the Dark Ages, most familiar from works like Malleus Maleficarum -- the ease of coexistence between things quite mundane and the monsters so horrifying and obscene as to evoke paintings of Bosch and Bruegel the Elder. All of that against the backdrop of plague-ridden Medieval Europe, crime sprees and grave-robbing.

Another element I enjoyed quite a bit was the Brothers' complete lack of awareness that they are doing anything untoward -- in fact, they react to any resistance from their victims with a kind of hilarious hurt indignation, which I found spot-on and fascinating.

Of course, the book is not without some issues -- there were parts that dragged a bit for my taste, and I was displeased about the fate of the only interesting female character. Yes yes, I know, Medieval Europe was not the epicenter of racial and gender equality; still. On balance though, I find it easy to recommend this book -- it's a terrifying, visceral fantasy that does justice to the Medieval sensibilities and finds its roots in Thyl Ulenspiegel and Brothers Grimm more than in Terry Brooks and other bland, extruded feudal worship. It was named one of the Amazon's top ten SF books of the year, and I have to agree that its place is well-earned.
Posted by Fish Monkey at 7:52 PM No comments: 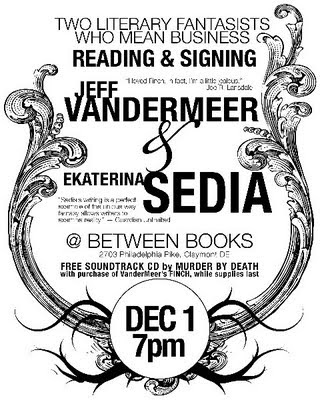 On December 1st at Between Books bookstore in Claymont, Delaware, Jeff VanderMeer and myself will be doing a reading.

On December 3rd, Jeff Ford and me will be reading at The Eagle Theater in Hammonton, New Jersey at 7:30 pm. See the pattern? I tend to read in tandem with World Fantasy Award winners named Jeff.

Anyway, I hope folks in the area can make it to one or the other. The Eagle Theater charges an admission fee (I think $10), fair warning.
Posted by Fish Monkey at 8:19 PM No comments:

We interrupt our regular Project Runway coverage to announce that Paper Cities (edited by yours truly) just won World Fantasy Award. To say I'm blown away would be an understatement.
Posted by Fish Monkey at 5:38 PM 1 comment: