Kate Upton Vs The New Ascetics 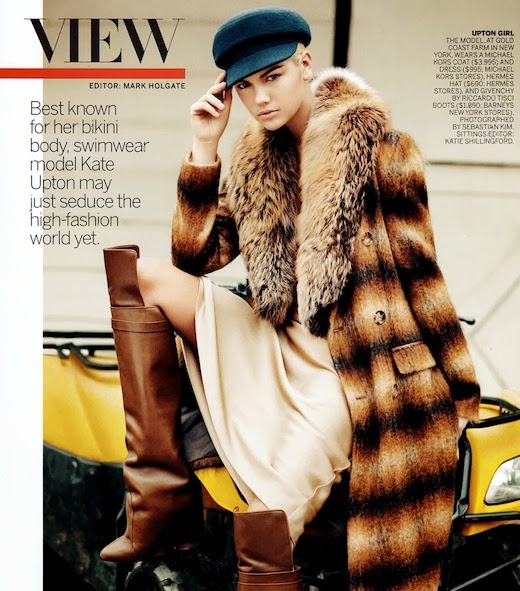 Remember the internet dust-up a few weeks ago, when SkinnyGossip published an article titled "Kate Upton is Well-Marbled"? There was much to do about that particular piece -- people arguing that Upton is thin vs people defending their life choices of living in a restricted-calorie state and "preference" for a thin look. While I think it might be important to mention that this argument rather misses the point and that perhaps we shouldn't treat women's bodies as public property, to comment on and to criticize, this is not what I'm on about today.

I want to talk about the role eating disorders are currently fulfilling in our spiritual landscape, and how that role may explain the hatred directed at Kate Upton. SkinnyGossip is of course a thinspo site, their disclaimers warning away individuals with eating disorders notwithstanding. Women on that site have their high weight, current weight, and goal weight in their signatures; goal weight for many of them who are 5'8" or taller is under 100 pounds. The quotes in their signatures are chilling: "I have not eaten yesterday and I will not eat tomorrow" made me do a double take. And they all focus their vitriol on Kate Upton for being fat, while her defenders argue that she is not. This is of course not about fatness but rather about someone who has publicly eaten food and is not sorry about it.

What went unremarked upon during this whole thins is something that is rarely mentioned in such debates: regardless of what fashion magazines may or may not promote, regardless of the societal pressure on women to conform to the (currently very thin) ideal, they do not make eating disorders happen. Stopping eating is difficult, refusing food on a regular basis is so much against every human instinct that most of us are not capable of it -- it's kind of like holding your breath until you suffocate. So anorexia is not a behavioral choice so much as it is a disease. Moreover, anorexia is an old disease, dating to long before fashion magazines. Self-denial of food, has been traditionally linked to religious mysticism, and by extension -- virtue. It is a form of extreme-self control that usually serves a purpose in an individual's psychological landscape far beyond mere vanity. It fulfills a deep need -- usually for control, but whatever it is, it is driven by much more than simple will.

So my sense is that the thinspo community is lashing out at Kate Upton not because of her violation of our notion of beauty, but rather because of the perceived violence she does to morality and virtue. Consider for example this comment from a SkinnyGossip forum user: "She´s "relatable" for girls as well, since her body type isn´t hard to achieve, nothing to look up to. No need for discipline, dedication, workout, restricting." It is a remarkably revealing sentiment -- illuminating the idea that success in modeling should be deserved via sacrifice. You see, a modeling career in this world is elevated to a mystical status akin to a monk's achievement of spiritual enlightenment through a fast in a desert. If another monk achieves the same state via hanging out on a couch eating bags of Twizzlers, I bet all the other ascetics will side-eye him like whoa.

Upton is disliked because she supposedly bypassed the self-flagellation route and attained success (=spiritual enlightenment) and is thus a cheat, rightfully despised by those dutifully sacrificing and restricting. The proof of her moral failures is well-documented in her campaign for Carl's Jr: 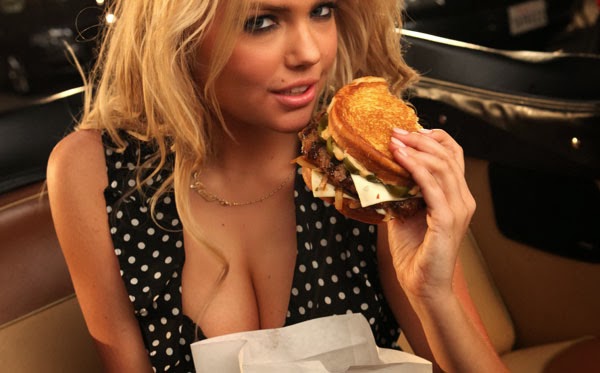 See? She is eating fatty foods, and yet she is walking the enviable runways and booking photoshoots in Vogue -- right after everyone under the sun said that she is not high fashion and just commercial, that the only people who like her have no taste. She is a failed model -- because models are the new mystics, whose power can only be achieved through self denial and rigorous flagellation... I mean, exercise. And yet, somehow, mysteriously and annoyingly, she is successful. Thus, the judgment passed on her is not the one of vanity but that of moral failure -- and this is why it is so harsh. Her crime is not being fat but rather being successful despite the lack of corresponding self-denial.

So on balance, I really do feel bad for Upton's critics. Thinspo sites exist for those with eating disorders to come together and feed each other's delusions, to reassure each other that they have chosen the right path - the only path to spiritual salvation, even though (especially since) it can lead to physical destruction. After all, bodily sacrifice is acceptable on a spiritual quest. What however is not acceptable is the living proof that the purpose of the quest is ultimately hollow. This is when we band together and deride the person who so rudely pointed that out: after all, they do not deserve their good fortune, those cheats and gluttons and sloths. It is only for the virtuous -- the ones who wear their commitment on their 30 inch hips.

Or, in the immortal words of Emily Blunt from "The Devil Wears Prada", "You don't deserve [these clothes], you eat carbs!"
Posted by Fish Monkey at 9:14 PM No comments: