Suzy Menkes and the Art of Sartorial Othering 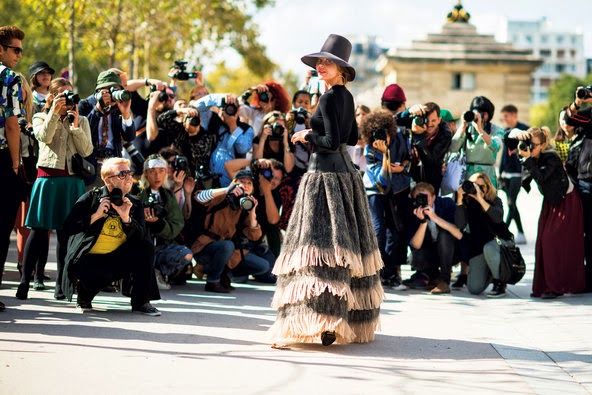 So if you follow the fashion blogosphere at all, you probably noticed the splash made by a recent Suzy Menkes article, "The Circus of Fashion". Go on, read it -- it's controversy-generating, to say the least. Many fashion bloggers have responded, from The Man Repeller's Leandra Medine to Natalie Joos of Tales of Endearment.

And this is a debate worth having. The bloggers do admit the circus (or, if one is inclined to kindness, performance) aspect of the fashion week. And then it takes the turn into the well-worn rut: the "old media" complains about those damn kids who just go and start blogs with no qualifications, while the bloggers point out the democracy of the internet-based fashion coverage. We then take a swing at street style photographers and those who bait their attention, and discuss the merit of various bloggers; this is nothing new. This is the conversation we have been having for years now.

However, there are two things that rarely get mentioned: the debate is of course not so much about different forms of media or even about the old guard vs the new guard. The discussion is very much about old money and new money, the contempt the former has for the latter, and the reasons for said contempt. Because the main difference between, say, Menkes and any of the bloggers she is slugging is that Menkes is employed by NY Times, which is paying her salary. The designers might refuse her an invite to their shows should she displease them with her reviews, but neither her income nor her ability to review their collections (as Cathy Horyn aptly shows) would suffer. That's the helpful thing about the Internet: now everyone can review the collections as they hit the web in real time. But I really think that the issue of income is an important one: bloggers DO rely on sponsorships by brands, and as such, are vulnerable to retaliation. Withdrawal of sponsorships and ads, not to mention free stuff, would affect the ability of a blogger to be entirely honest in their reviews. I mean, if Cathy Horyn was a blogger, she would not have many sponsors to disclaim in her posts, if you know what I mean.

So Suzy Menkes does have a good reason to be suspicious of bloggers: many do write amazing content. And yet, fashion industry does provide their income; biting of the feeding hands is generally not a wise strategy, at least for those whose main source of income comes from the fashion industry. And yes, I am certain that most bloggers DO genuinely like the things that they review. However, negative reviews are rare in the professional blogosphere. Most of the reviews are overwhelmingly positive, and the not-so-thrilling shows, products, and shoes are merely not mentioned (just like money in polite company).

The second aspect is a lot less defensible though. The bloggers and street fashion stars that Menkes calls out almost all are either people of color or Eastern European -- two groups that tend to spoil Westerners' vacations and other moneyed pursuits. It's hard to take Menkes seriously when she complains about fashion week becoming a "circus", as she sounds very much like anonymous sources in W Magazine that wibble about Saint Tropez not being what it used to be due to an influx of "rappers, Arabs, and Russians" (direct quote). The targeting of these groups is especially obvious once Menkes compares the show-off nouveau-riche to the ever-classy and super French: Emmanuel Alt, Virginie Mouzat and Ludivine Poiblanc. The "understated chic" is presented as an inherently superior alternative to the "look at me fashion" -- the conspicuous consumption by the groups that has been denied access to luxury until very recently.

It is almost funny to see Menkes say, "It is great to see the commentaries from smart bloggers — especially those in countries like China or Russia, where there was, in the past, little possibility of sharing fashion thoughts and dreams", without apparent awareness that the very people she is chiding are mostly Russian and Asian or of Asian extraction. Basically, the previously fashion-deprived are welcome to share in the glory of fashion as long as they conduct themselves by the rules established by their betters -- French and East Coast USA fashion editors, who consider visible luxury gauche (gotta love the oh-so-Puritanical disgust of things that LOOK expensive), and who would tut-tut those newcomers for their lack of restraint and manners.

This appeal to good taste is a fascinating tactic of sartorial othering, the one that is deployed very quickly at any sign of status quo being threatened. We constantly read articles reporting how luxury goods markets are going through the roof in BRICS countries, with the authors' disapproval palpable. Even in this ostensibly post-colonial era, we know who is in charge because they are the ones who set the rules of what is and isn't in good taste, and who should and shouldn't be spending their money on Gucci sunglasses. And while I generally enjoy smart fashion coverage done by the old guard of Menkes, Horyn, and Yaeger, and I do believe that their financial non-dependence on fashion is essential to their freedom of expression, I do not relish Menkes' finger-wagging. This is a favorite tactic of the dominant group hellbent on maintaining their dominance, and that is just in bad taste.