One More Thing About Eating Disorders 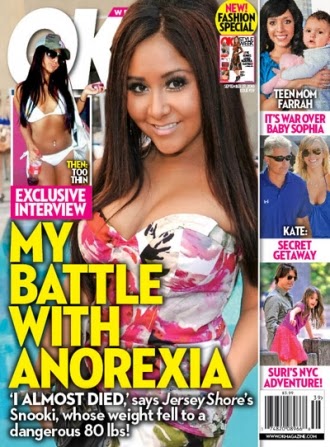 I recently read a couple of articles about anorexia, and they got me thinking about the positioning of eating disorders in the society. First, there is this, from a couple of years ago: tl;dr version is that JK Rowling saved the young actress who plays Luna Lovegood from anorexia by writing to her. Quick disclaimer: I am sure that Ms Rowling meant well, and ultimately she was helpful. What I do have a bit of an issue with is this sentence: "anorexia is destructive, not creative, and the brave thing was not to succumb to it.” And of course sending the girl to a professional would be the right thing, but that's a whole other issue.

Bravery, see, implies a personal choice. We use it so often to refer to diseases that what was never a question of morality but simple luck somehow morphed into an ethical decision: "he fought cancer so bravely", "long battle with MS", etc etc. With the implication that those who died, lost -- because they haven't fought hard enough. And anorexia is a disease, the kind that is not actually recognized as such by the overall societal discourse (despite being a legit DSM diagnosis), and framing it in those terms only contributes to the idea that anorexics choose to starve themselves.

Try it. Try not eating. It is difficult -- almost as difficult as not breathing or drinking, because for most people survival takes over and they will eat once their body feels starved. Not so with anorexia nervosa, and it does no one any favors to treat it as some hysterical affectation teenage girls succumb to because they see too many pictures of models. Trivializing mental illness is nothing new, of course, but it seems that it is especially true of mental illness that is thought to affect mostly women.

And thus my second point: anorexia in men seems to be "on the rise". I question the "on the rise" part because traditionally anorexia has been associated with religious asceticism, primarily in monks. Recently however we so relegated this condition to the lady realm, that some psychologists even feel that the diagnostic criteria for anorexia are gender-biased (that is, loss of a menstrual cycle -- a criterion that is obviously absent in men, but nonetheless might make the clinicians more reluctant to diagnose men). So now we even have this repellent term, "manorexia", to further emphasize that this is a lady thing. Because ladies are the ones who succumb to external pressure to look thin -- and we can certainly be excused for thinking that, because women DO exist in a constant state of bodily scrutiny in a society that tells them that their looks are their only worth.

As a result, there is an intense external pressure on women to conform; this is why so many women diet, self-criticize, and live their lives on the ellipticals. Women are pretty much expected to have pathological relationships with their bodies -- hence the usual bonding over self-loathing, so frequently spoofed in sitcoms and yogurt commercials, and ritual expressions of guilt over cookie trays. College campuses organize "no fat talk" days to curb the traditional self-shaming. So yes, clearly there is trouble.

And yet, not all of these women -- in fact, not even most, not even a great percentage! -- develop anorexia. The reasons are similar to why we can all watch sad movies, cry, and yet not have depression. Mental illness is internally driven -- anorexia, for example, is often thought to originate from the extreme need to control one's environment; it's a response to the internal need (for control), not mere external pressure (to look good). And pretending that these two different problems need to be treated in the same way is destructive -- as if we decided to battle depression by banning sad movies.

So yes, let's put a kibosh on constant body shaming and demand for women to be decorative, occupy little space, and keep their mouth shut. Let's accept a wider range of beauty. Let's tell our children that it is indeed brave to maintain a sense of self-worth regardless of what other people say about your appearance. Let's stop pathologizing female bodies altogether. But also let's recognize that mental illness is indeed illness, and take it seriously enough encourage those affected to seek professional help. Because, like with any other illness, telling someone to put up a good fight might not be enough. And really, being ill is bad enough without people telling you that you only succumb to it because you are weak.

Posted by Fish Monkey at 6:20 PM No comments:

Fashion Is a Foreign language 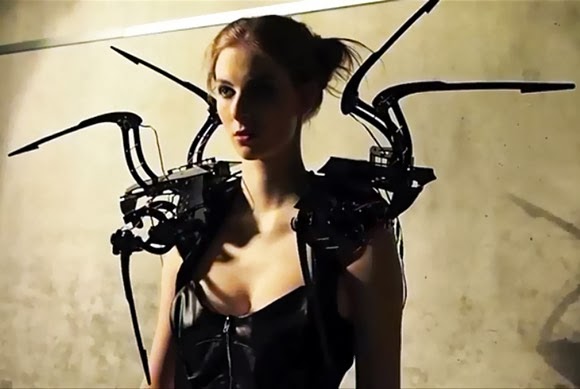 No fewer than three people alerted me to this article. A spider dress is of course an amazing idea, beautifully executed, and represents a really inspiring instance of wearable technology. Technology however is far from the only exciting fashion thing happening in the world today (Sonia Rykiel’s Pre-Fall 2013 collection, anyone?) Yet this is the only thing my friends on the geekier side noted – it was on io9, but the interesting thing here is really the whole geeks and fashion interaction.

Sure, there is the SF/tech aspect to the spider dress, and this is obvious. But besides the clearly techy things, nerd fashion statements do veer decidedly into less-than-subtle territory – behold the preponderance of corsets. And historical garb. And basically every fashion statement is a dress-up, clearly delineated from the daily uniforms of jeans and tees.

Part of it is probably because fashion is still at its root perceived as deeply feminine, and geeks are notorious for despising al things traditionally feminine – from the cult of technology to women often trying to be “one of the guys” (of which I wrote before, like here); in that regard they are not different from the rest of the society, but traditionally feminine women are often less visible in geekdoms, and I won’t even start on the whole “fake nerd girl” thing because ugh. There is also of course contempt for the mainstream, and fashion is a very mainstream form of non-verbal communication. So out of this confluence, we get a group of people who are not simply uninterested in fashion but contemptuous of it.

And then there is another thing: “social ineptness”, at least self-professed, is almost a point of pride or at least identity in much of geek culture (just how many times the whole “But geeks are socially inept! He was just flirting!” thing gets trotted out during various con sexual harassment dust-ups?) Attempting to be an isolated culture, mainstream language (verbal and not; I was actually called a “mundane” at my first World fantasy Con, which was funny) is treated as an imposition, and people just can’t be bothered with mundane rules and communication etc. Yet, they do recognize the importance of communication – but most are not particularly fluent in many of its forms.

Fashion is such a language – many geeks don’t speak it, yet they need some of its tools. And trying to speak a language one is not fluent in of course ensures that there is no subtlety in it. “Sexy” becomes corsets – as exaggerated a statement as one can make, while a subtle statement to the same effect could involve  a lace collar peeking from under a masculine jacket. Fashion statements become the loud and the obvious, because it is impossible to speak the language you don’t know with any finesse. Even gender-identity related fannish events, which could be an interesting exploration of gender presentation, often end up as a bunch of men in dresses and women in badly fitted suits borrowed from male relatives – that is, campy cross-dressing using the most obvious markers of binary gender, instead of a range of gender identities and accompanying presentations. The commentary on fluidity of gender and androgynous dressing is, ironically, much more nuanced and interesting in actual fashion magazines (see here, here and here.)

One can of course argue that all sorts of costuming are ways of dressing up without looking like you’re taking any of this seriously – personally, I never liked costuming and find RenFaires puzzling; but I can see how for people who reject mainstream fashion, costuming can be a way of playing with clothes without looking like they’re buying into the cultural narrative. It does however serve a function different from the everyday dressing, which is about communicating with other people. Costuming is kind of the opposite of that – a refusal to enter a conversation, an attempt to delineate that you are not interested in talking to anyone in this century or this reality. I am however mostly intrigued by dressing as communication – and this is where many geeks have to resort to over-the-top gestures in order to be understood. So corsets, which are a fashion staple at many  cons are just that – an attempt to speak in a foreign language. Whatever sense of the empowerment experienced by the wearer likely comes from the realization that they are communicating rather than any inherent power of sexy dressing.

I am of course not arguing that geekdom should immediately transform itself into a buffet of fashion plates – merely, that realizing that dressing is a form of communication is worthwhile, and recognizing the common signifiers could be a way of exerting control over this communication. And as cool as spider dresses are, mastering another language is pretty amazing too.