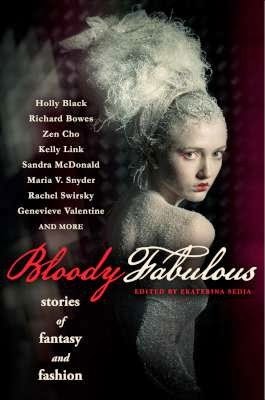 Year in review: three anthologies and one short story collection, with a few shorts published here and there (Asimov's, ZvR, The Future Is Japanese IIRC). Wonderful trip to BVI's Scrub Island, with tons of snorkeling, kayaking, and paddleboarding. A great trip to Moscow, tinged with sadness, since this is when my father was ill. He is however spectacularly better, and this is something that made me so grateful. Also am grateful for well-being of my friend Tait, and for the chance to see Jason, Molly, and Jesse in person.

Work has been busy but rewarding, with added responsibilities and corresponding lack of time for other stuff. I did manage to add spinning to my usual gym routine, and lifting progressed nicely, to routine benches of 115 lbs.

I am glad I was able to keep up my fashion blogging, not the least because I was able to appreciate (and wear!) pieces by Van Hongo , Ella Lai Fung Kwann, Fyodor Vozianov, Ksenia Schneider and Viktor Luna (thank god for sample sales.) I hope to continue ditching clothes produced dubious labor practices in favor of independent designers. 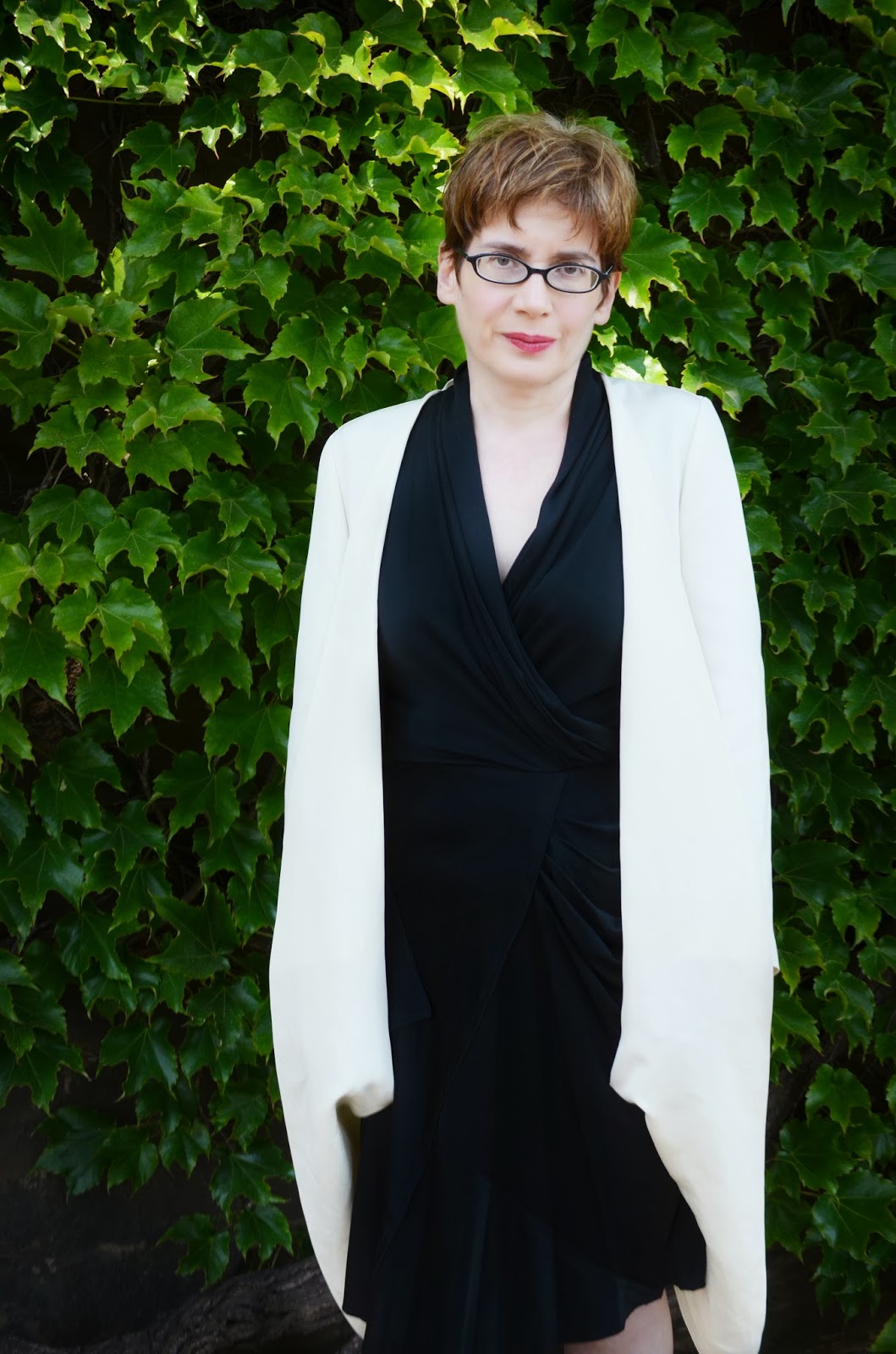 (Me in my Vozianov jacket. Photo by JR Blackwell).

I rarely talk about my home life here, but this October Chris and I celebrated our 13th anniversary (and 15th anniversary of being together), and I am happy to report that we still like each other and enjoy each other's company -- the recent vacation made it especially clear. It's nice when your spouse is also your favorite person to hang out with. And occasionally climb huge rocks and kayak. 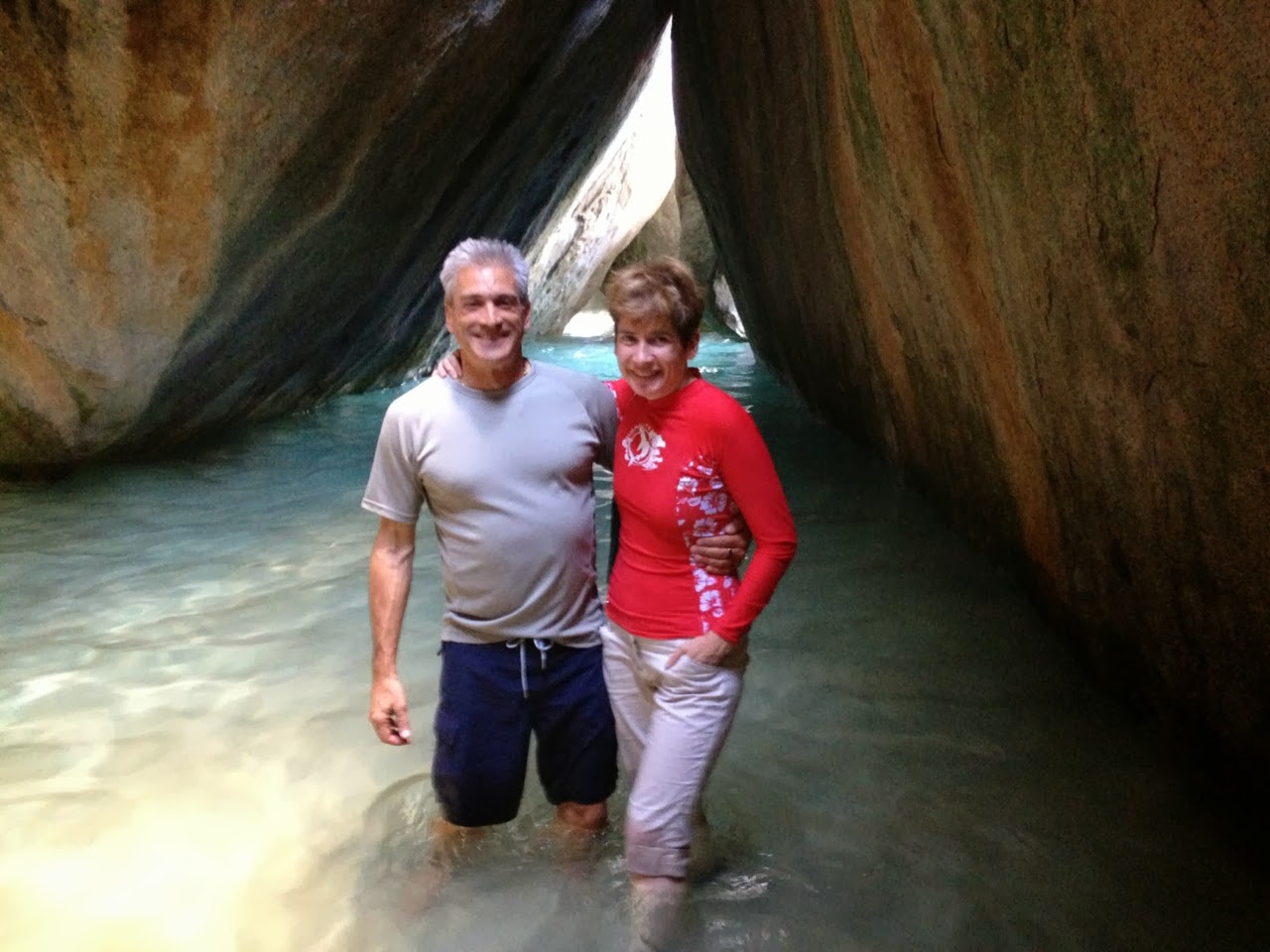 (Chris and I at the Baths, the famous location at Virgin Gorda, BVI)
Posted by Fish Monkey at 3:24 PM No comments:

See the pattern there? I really need to start posting more! 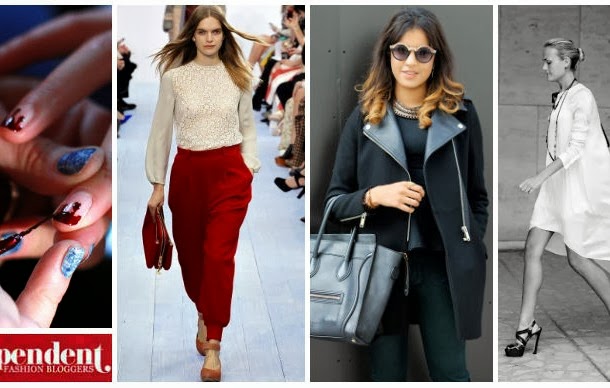 A New Way of Thinking

Edited By Taylor Davies I called this round up “A New Way of Thinking” because I truly read some remarkable blog posts this week. More than personal style and shopping guides (though I love and included some of those, too), there were heart-felt truths about our community’s lives, as well as success stories that really inspire. After spending some time reading a few of the below posts, I am feeling and thinking differently about a few things – from Nordstrom to online shopping to our obsession with shoes and perceptions of Asian fashion. And that’s just the beginning. Take a moment to really appriciate this week’s round up, it’s worth it. Thank you so much to all of our brave and creative contributors!


SPONSOR: Shopbop Coupon: Deux Lux, Gucci Sunglasses, Penfield, Versace Bags, Ferragamo Flats, LemLem, Bag Sale, Shop 30, 40 , 50 Our Designer Sample Sales If you would like to submit your link for next week’s Links à la Mode, please register first, then post your links HERE where you see “Links a la mode next week’s date (official).” The HTML code for this week will be found in the Links a la Mode widget on the right side of the blog, and will be published later today. ~ Jennine

A few days ago, I posted a picture of a shoe on my Facebook. In fact, it was this one, from the Givenchy resort collection that just landed at Barney's New York: 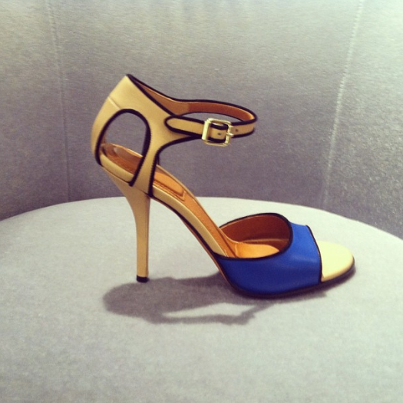 And one of my good friends finally posted a question that has been on minds on many many men and probably almost as many women ever since Carrie Bradshaw hammed her way into the public consciousness with her exaggerated shoe worship (and I am paraphrasing here): "What's with the whole shoe situation?"

There is of course more than one shoe situation: first, there's the aforementioned Carrie Bradshaw corporate sponsored nightmare of assuming that women react to shoes with irrational and universal lust, which is largely nonsense. And demeaning nonsense at that: blowing one's mortgage money on shoes is not endearing; I would go as far as argue that normalizing such irresponsible spending with "Oh, women and their shoes" and a shrug is actively damaging, since women as a group are still largely financially disadvantaged (I would not blame it all on Alejandro Ingelmo though.)

Secondly, there's the fact that shopping for shoes is largely free of body anxiety associated with clothes shopping. Unless there's pregnancy, a woman's shoe size is likely to stay constant through the aging, weight gain, and other anguish-producing milestones. So I can certainly understand why in the world where women's value is measured by their looks and youth, and they're likely to be rewarded for "making an effort" (as opposed to "letting themselves go") -- such effort often measured in attempts to decorate themselves, as evidenced by shopping -- why shopping for shoes would be seen as both compliant to the societal demands and yet offering an escape from their pressure. Which leads us directly to the third thing!

Third, there's the whole footwear as a shorthand for feminist leanings and shoes as a marker of patriarchal dominance angle. Heels often come under attack as a modern form of foot binding and are seen as incapacitating a woman (but how will she run if she's attacked? No questions are asked about WHY do we assume that a woman would be attacked and what we should be doing to prevent that. Encouraging men to not be rapists somehow seems like a better solution than a flat shoe).

But of course heels may and do change the visual proportions of the body -- they make the lower portion of the leg relatively longer, which makes for a more esthetically pleasing proportion; yes, there are evolutionary reasons for that! They also improve one's posture. But apart from all the esthetic aspects, for individuals like me (5'4") they do offer a physical boost. It is important since in my daily life I often interact with men who commonly attempt subtle intimidation by standing close and towering. Extra 4 inches lets me look at them face to face rather than looking up -- a significant advantage for not looking submissive. 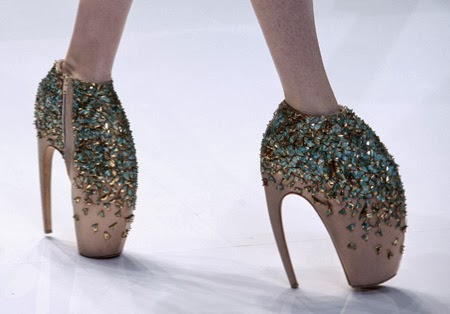 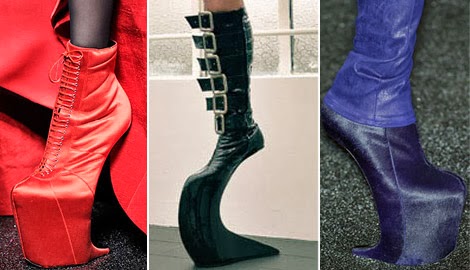 Even with less esoteric pairs, shoes and bags are usually outfit parts that one can take color and textural risks with, without quite going to the extremes pictured above. Most of my wardrobe is neutral, in ivory, camel, grey and black, so shoes are a good way to introduce color, interesting texture, and an occasional weird shape.

And finally, fashion is art, and shoes are a part of it -- the 3D, sculptural, textural part. But unlike other kinds of art, like say traditional painting and sculpture, I think fashion is 1) art that women were not only allowed to participate in but encouraged, to make themselves into ornamental objects and 2) straight men had no interest in it and thus women and gay men were allowed to have this space as all their own. I have written about this extensively, but in my own life I find that my interest in fashion has evolved from interest in labor movement to an exploration of fashion as social signifier, and now it seems to be grading into the territory of re-appropriating the traditionally feminine -- since all too often the reaction to being an oppressed class is to cast off the markers of it and instead adopt the signifiers of the oppressor.

And all of this -- re-appropriation of the feminine and appropriation of the masculine, that focus on ornamentation as both rejection and affection for the history of oppression and a road for escaping it quickly becomes subversive. For example, Victorian corsets that are often cited as instruments of oppression were commonly used to induce abortions -- that is, the instrument of oppression became the instrument of liberation. Surely we can do it with heels? Surely instead of running from assailants we can make them into weapons? They don't call them stilettos for nothing...