I promise there will be some new content soon. A thing I'm mulling over right now is that Salon.com article about September Vogue spread that only featured male writers, so of course I have thoughts on that. meanwhile, here's another roundup, courtesy of IFB. 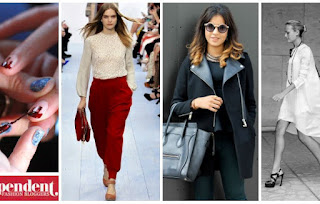 Edited by: Jess of Fresh Jess If I had a dime for every outfit post out there, I’d be a billionaire. With so many in the mix, it makes the “different” posts stand out that much more. For this week’s Links a la Mode roundup, you’ll get a peek into IFB bloggers’ lives well beyond their closet. Many of them are tuned into Fashion Week, fall trends and Fashion’s Night Out, and have put some serious thought into how these major events affect their own personal style. Others are beating to their own drum, telling stories of how dreamy places, artistic notions and the evolution of street style are bringing their wardrobes alive. Whether you’re enjoying the first, crisp breeze of fall or savoring an Indian summer, there are some great reads from some truly unique voices here for you. Enjoy!

Labels: credit where it's due, fashion, PSA

And my review of Van Hongo's collections made it into this weeks Links a la Mode by Independent Fashion Bloggers. Fab! 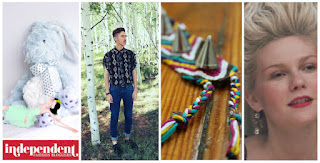 Since it’s inception, spearheaded by Anna Wintour and Conde Nast, Fashion’s Night Out has grown into a global celebration of fashion and retail – and an excuse to stay out late, sip on fancy drinks and maybe encounter a celebrity or two. Many of this week’s posts shared the FNO adventures of our global community – from London to Dusseldorf. There were also some wonderful illustration-infused submissions that breathed fresh life into the idea of an outfit post, as well as more than a few transportive, dreamy posts about Versaille, Louis Vuitton, dressing for the Alps and more…

If you would like to submit your link for next week’s Links à la Mode, please register first, then post your links HERE. The HTML code for this week will be found in the Links a la Mode widget on the right side of the blog, and will be published later today. ~ Jennine
Posted by Fish Monkey at 11:49 AM No comments:

Labels: credit where it's due, fashion, PSA

Izumi Hongo's brand, Van Hongo, continues to amaze. I am terribly late in talking about Spring/Summer 2012 collection (and let's be honest here, I'm so much more in love with Fall and Winter clothing), but better late than never. Previous reviews can be found here and here. 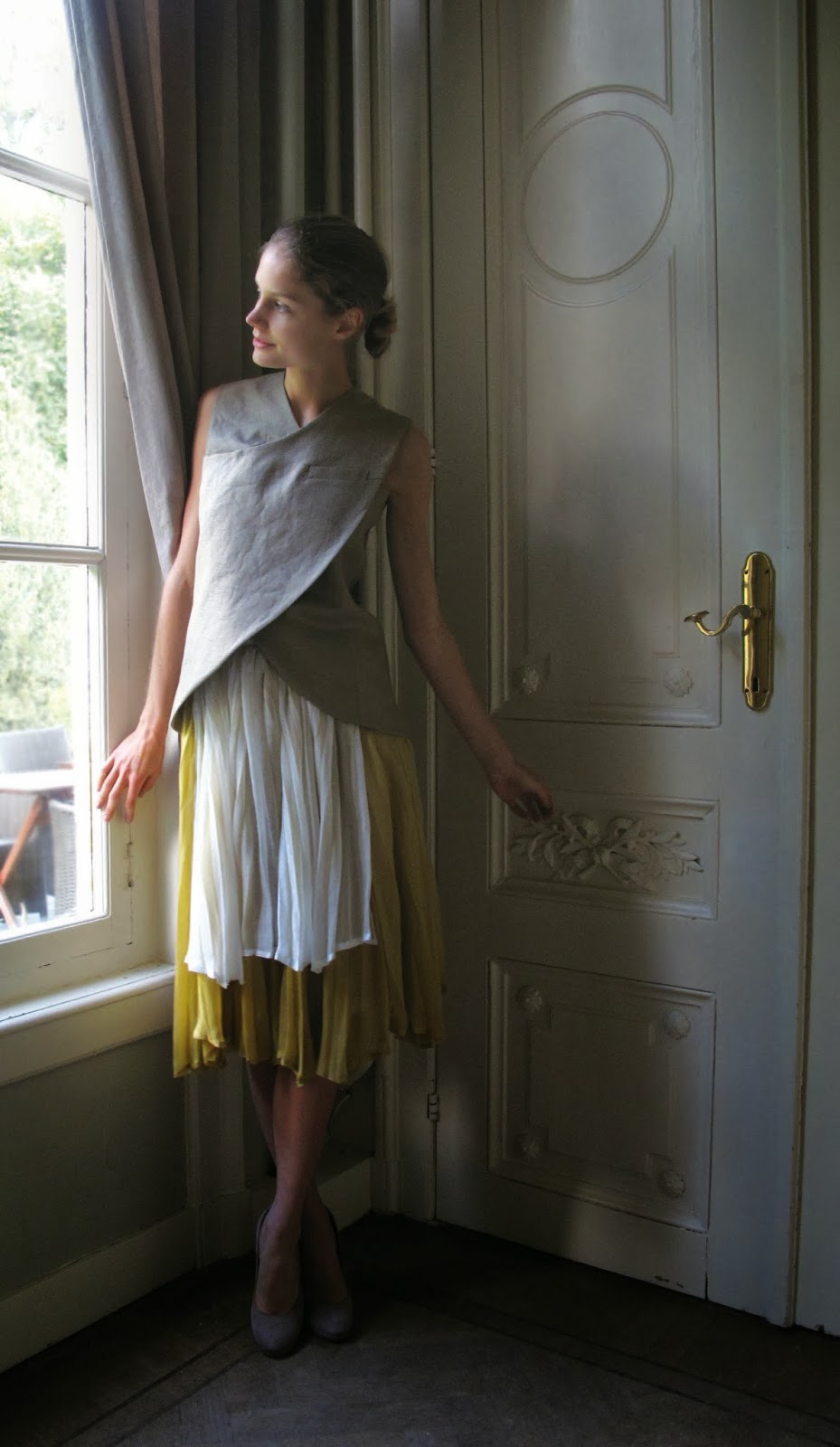 First, the summer and spring clothing of Intimate Luncheon look both lightweight and substantial due to clever use of texture -- something Hongo definitely excels at. From photographs alone, one can recognize heavy silks, textured linens, and chiffons juxtaposed with denser, draped fabrics. 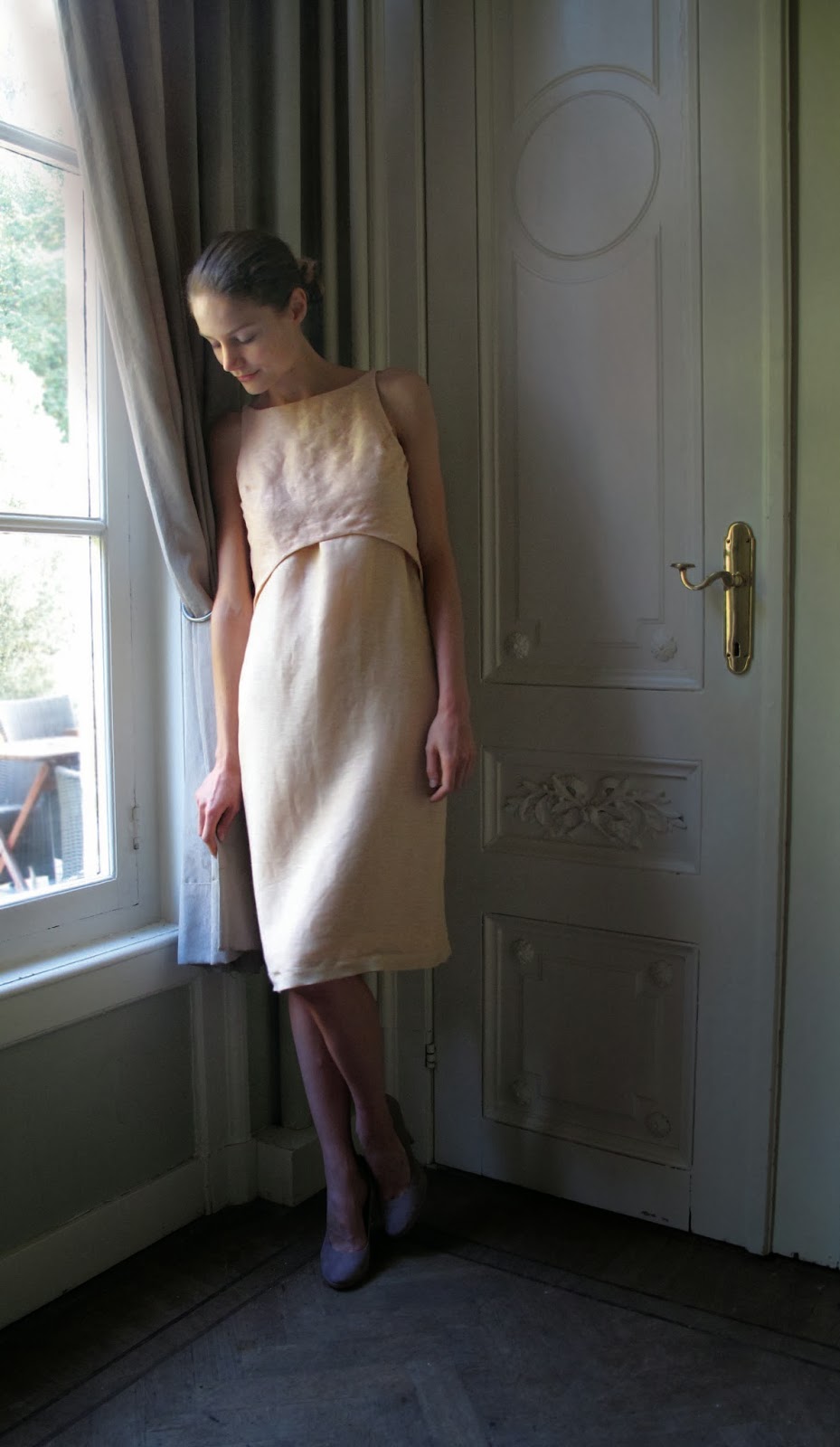 The palette is heavy in creams, greys, and acid yellows and greens -- something Hongo gravitates to. This collection seems especially pared down in color and the silhouettes are also tending to more classically feminine -- shifts, crossover tops, floaty skirts predominate, with an occasional tapered trouser thrown in. It of course fits the name: with all Hongo's collections, a name alone strikes you as fanciful, but then you look at clothes and go, "of course". "Luncheon" evokes the image of traditional femininity, ladylike and classic; the intimate part strips away the formality -- pearls and hats and gloves, leaving simplicity clad in contrasting textures, familiar and yet delightfully new. 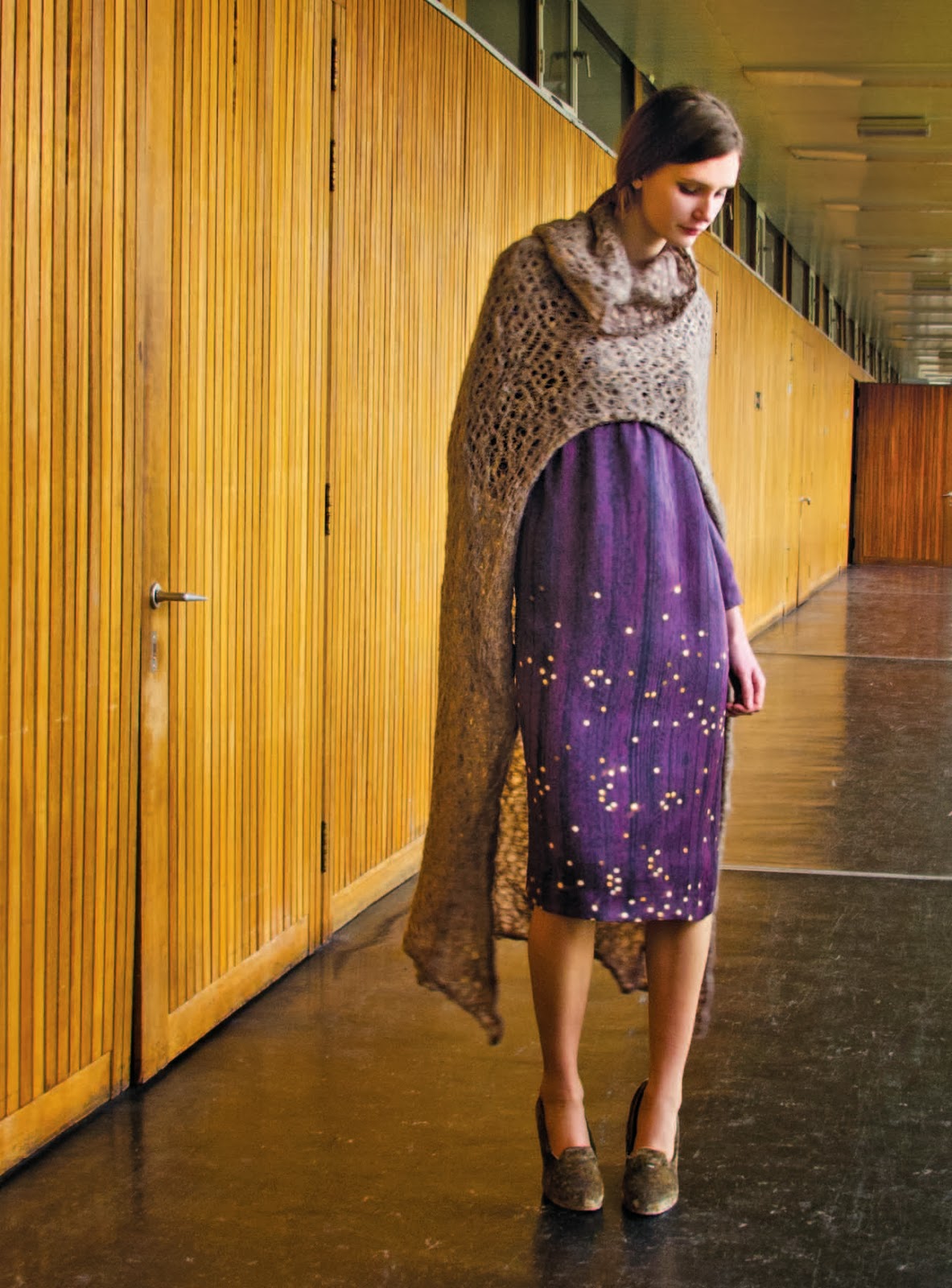 A/W collection, Recording Room, is as similar to her previous Salonniere as it is different -- the palette of purples and mustards is familiar, as well as pleated trousers and spiderwebby knits. However, she also shows more simplicity in shapes and textures: no more velvet or kite-back shirts, but again the simple silhouettes. The most noteworthy addition perhaps are the simple, long sleeved shifts, straight and basic, devoid of any elaborations but the exquisite, cashmere-like drape. 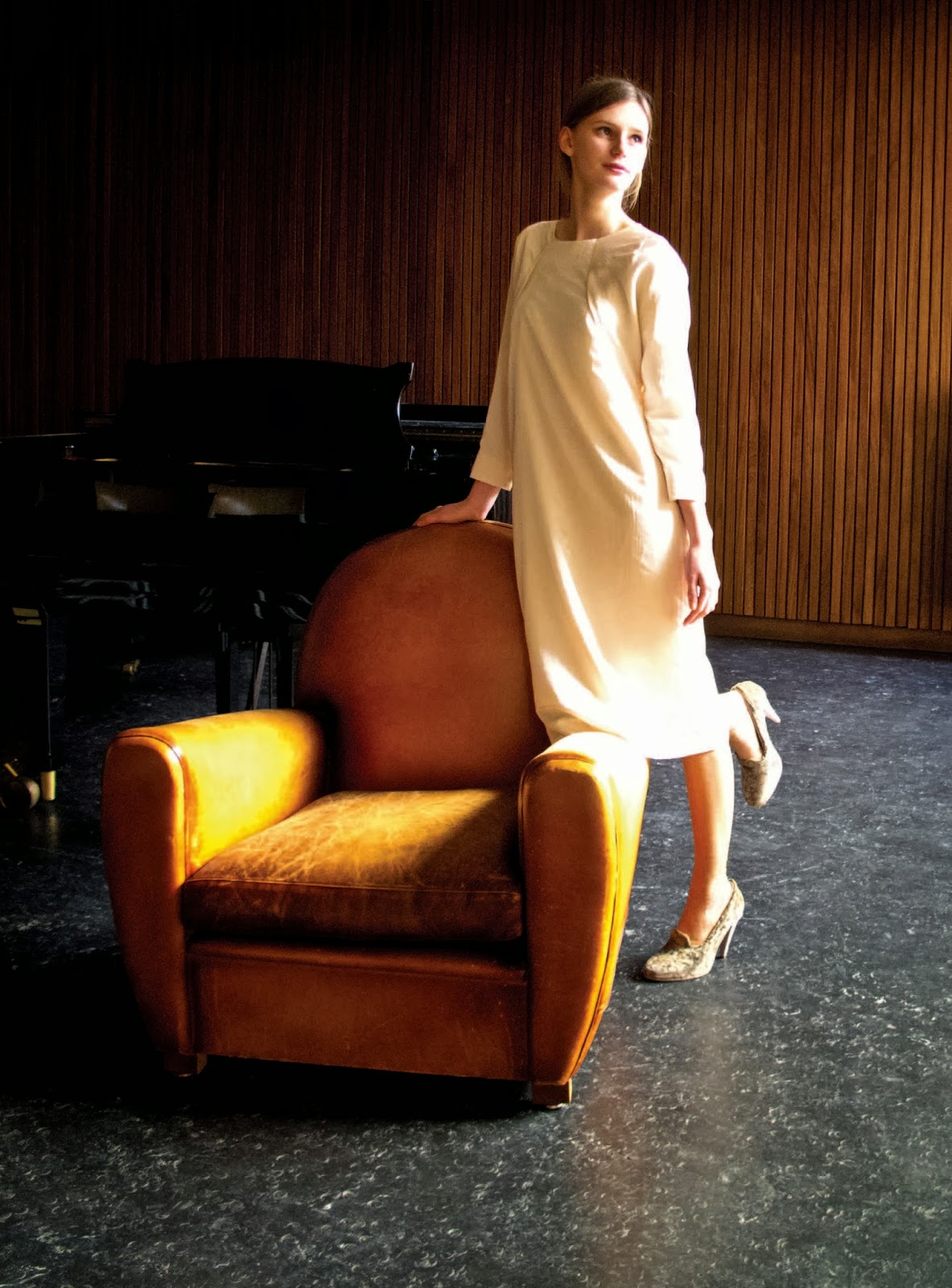 There are some flourishes on a few of the pieces -- a scattering of sparkle against the inky-violet dress or a blouse, an occasional origami pleat on a skirt -- but those too read as restrained. There are exquisitely cut coats that evoke Jil Sander with its luxurious minimalism, and woolen, snuggly pleated skirts. And of course, there is a piano pictured in some of the lookbook shots -- it is, after all, a recording room. 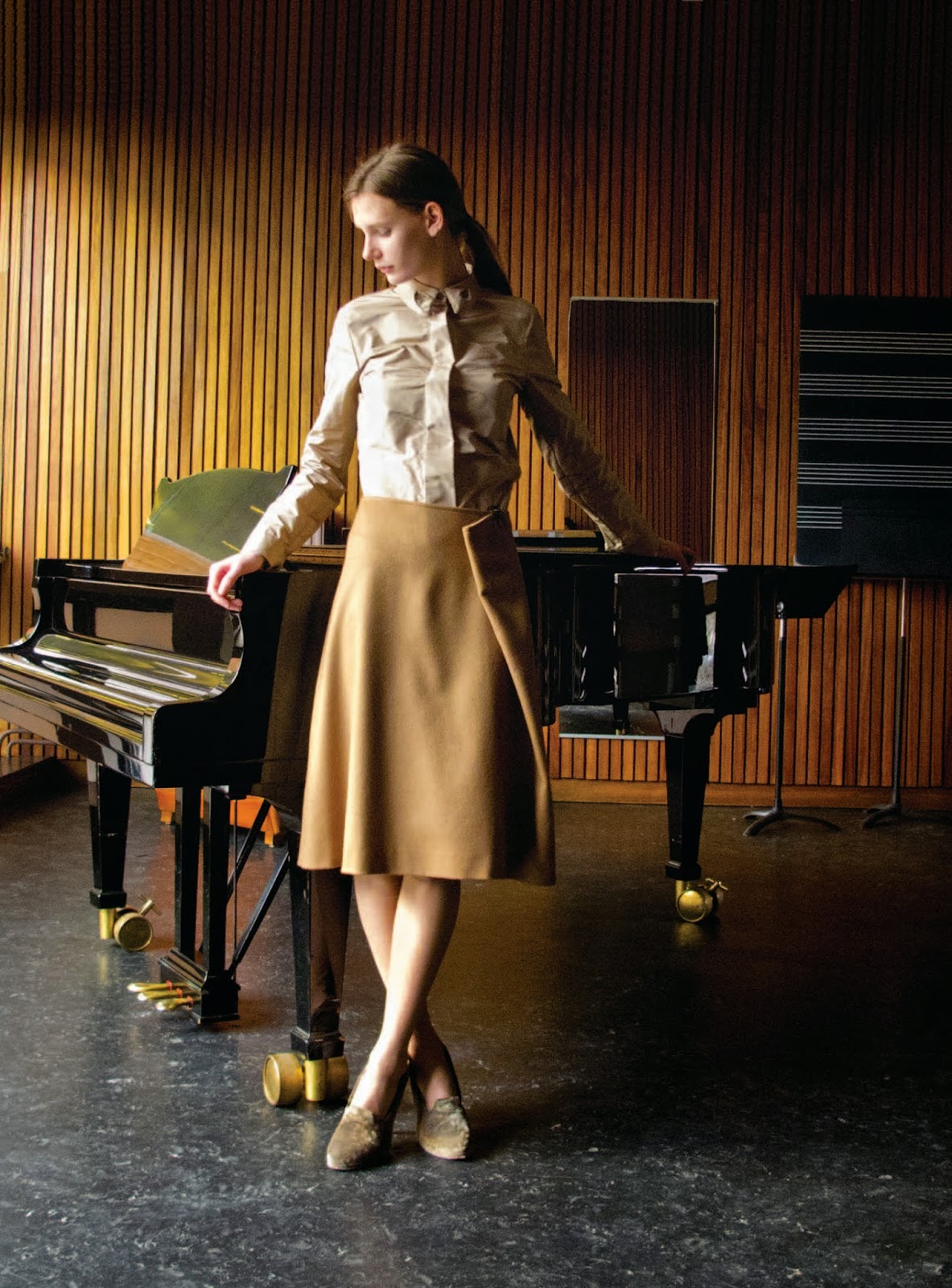 The connection in this one is perhaps more oblique than in Intimate Luncheon -- but the sense of melancholy, of the autumn sun struggling to come through the wooden slats of the walls and bursting in through the cracked door is fitting perfectly with the artist's wardrobe; or rather, a fantasy about the artist, a stylized tableau meant to evoke an ideal, an ur-musician of many daydreams. Her clothes are luxurious and interesting all at once. The interest, as always, is generated primarily by textures, and I am glad to see so many simplified cuts that still fully embody Hongo's esthetic. And yet there are still enough architecture in these minimal pieces to make them true standouts. Just look at the long knits, not quite cloaks, not quite shawls, or at the carefully crumpled button up shirt.

So yeah, still waiting for the day these will show up in my local boutiques. For now I will have to write gushy reviews. 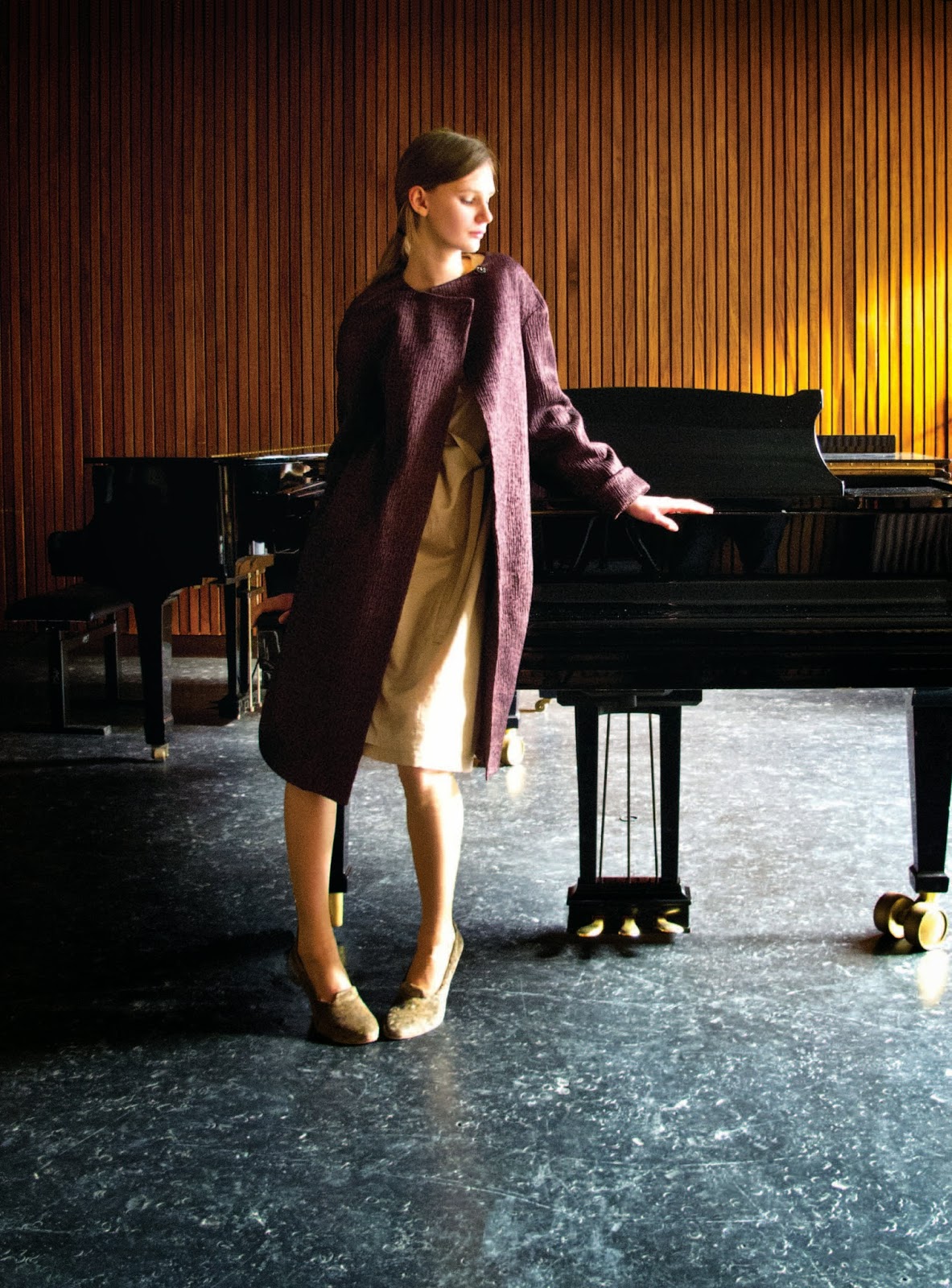 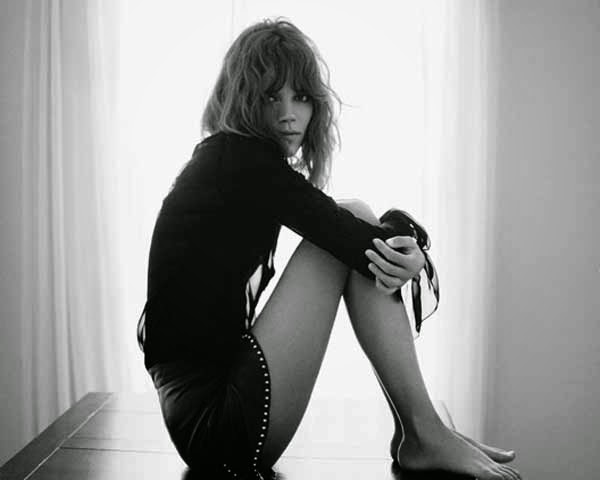 So a number of news outlets ran a story about Zara -- a fast fashion chain, who is apparently not doing as well in the US as the rest of the world due to the fact that their sizes run small. That part itself isn't particularly controversial -- I am not a big Zara shopper, as I tend to avoid fast fashion in general, but occasionally I am tempted to try on an especially trendy jacket (haven't bought anything yet), and I know their sizes are actually the same as most designer versions (which tend to be almost aggressively anti-vanity sized). But compared to Gap, Banana Republic, JCrew these sizes do run small. Or, if you prefer, Gap etc have fallen victim to "vanity sizing".

I find the term "vanity sizing" very curious -- it seems to place the responsibility on the wearer rather than a manufacturer. As if it was the wearers who demanded that the manufacturers redefine their sizes to assuage their egos. This is of course not the case -- women for one didn't decide that they need to fit into the smallest size possible in a cultural vacuum. The media is saturated with references to acceptable sizes for women -- size eight, four, zero have all been touted as THE size every woman should fit into or at least get as close as possible to be socially acceptable. Without those 8s, 4s and 0s referring to a real thing (like, say, a specific measurement in inches) what is to stop the manufacturer from shifting those sizes to sell more units to women, basically luring them with promises of social acceptability IF THEY BUY THIS DRESS? Nothing, of course, and it is not the wearers and the buyers who are to blame -- it is the unrelenting pressure from the society and the basic tenet of capitalist economy: dissatisfaction will keep us buying. But yes, we still blame the victims. NB: and of course since there isn't a TRUE size 0, 2, 4 etc, since sizes are arbitrary anyway, so the whole "vanity" thing is a bit of red herring. But I'll roll with it anyway.

(Of course if it was indeed the issue with people getting bigger, the sane response to it is not to redefine the existing sizes but rather add more clothes at the larger end, and extend the sizing as necessary. But now many stores are not carrying anything over the size 16; plus-sized departments are often depressing, ghastly places populated by juvenile ruffles, sassy t-shirts, and potato sacks. Although this is changing, attractive larger clothes are still hard to find, and plus-sizes are still segregated. And we are forced to conclude that vanity sizing is not the result of the manufacturers trying to accommodate a larger customer but rather to sell more crap by peddling illusion of social acceptance).

The victim blaming, hand-wringing and pearl-clutching get fascinating in comments to those Zara articles. It is perhaps best exemplified by the following comment: "Vanity sizing is partially responsible for the obesity problem in America. If a women buys a dress and the tag says she is a size 6 when she is really a size10, then she feels her body and weight are just fine because she is fitting into a size 6."

Yes, people. Vanity sizing is killing us all because apparently there are fat people among us who don't realize how truly fat they are (hint: there are not a single fat woman in the Western world who doesn't know she is fat. We remind them daily.)

Then there is an issue of morality, again. You see, Zara is a business, and their sizing is not a moral choice but a business one: do they need to extend their sizes (which, by the way, is different than vanity sizing -- they can keep the existing sizing scheme but simply carry additional larger sizes) to accommodate customers who would be happy to give them money if they could find clothes that fit? Many commenters don't think so. They approach it as a moral issue (you don't deserve these clothes!):

"Americans need to lose weight...period! I am 5'7" and weigh 115. I am a zero in vanity sizes at stores like Banana Republic, or Old Navy. At Zara and H&M, I am a 4! If these stores change their sizing, they will need to make xxxs to accommodate the leaner individuals, such as myself! I say, keep the sizing chart as it is Zara! If fat Americans don't like it, tell them to eat a salad:)"

Zara should apparently just fail financially to make a point. Not to mention, that I wonder if people who are sized out of Zara are truly the ones who are seriously overweight. Most people who shop at plus-size stores are unlikely to set foot in Zara and such retailers (and if they did, they would likely be hustled out of the doors by salespeople.) But that of course is besides the point; I do find it interesting however that to many people accommodating larger sizes seems to mean discontinuing the smaller ones, which of course it doesn't have to, not to mention catering to the rampant self-indulgence.

So on balance, it seems to me that complaints about vanity sizing are just a form of concern-trolling (but how will fat people know they're fat? This ignorance might kill them!!!) Because really, everyone deserves flattering and well-made clothes that make them happy. The manufacturers are of course free to define their customer base; they are free to shoot themselves in a foot if they are so inclined. But let's not pretend that their decisions are at any point driven by morality -- even when they should be, like when they use our anxiety to sell us crap.
Posted by Fish Monkey at 9:45 PM 7 comments: