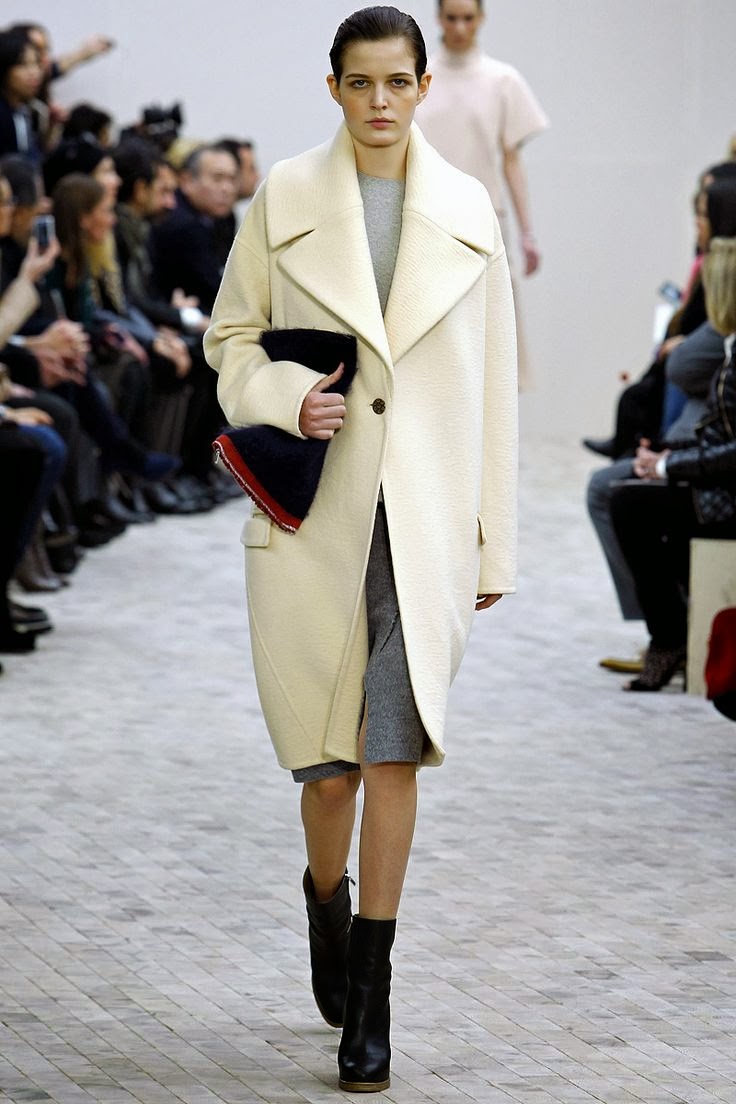 Lately, many of the fashion blogs I read have been pushing the whole minimalism thing. Not just in clothing cuts, where the runways indeed having tended toward the spare and the monochrome and the beautifully sculptural, as Phoebe Philo, Jil Sander, and Stella McCartney reached farther and deeper into the fashion psyche. I am of course down with that -- 99% of my stuff is black, cream, grey and blush. But there is also another kind of minimalism happening: shopping diets, various challenges with artificially restricted wardrobes, epic closet purges, and the general impetus to simplify one's life and getting dressed in the morning. While I am not a fan of the idea that anyone's wardrobe MUST be a certain size, I am certainly down with the simplification as well. Most of it is practical: we have one walk-in closet (not a large one), and husband and I share it 50-50. There are shelves and bins for foldables, but most of my clothing is tailored and thus has to be hanged. So I cannot really expand beyond a single rail, so for a long time the rule has been that if I bring something new in, something has to go. Which hasn't been an issue really because in the past few years my size has changed, so most of my old clothes had to move out. I haven't been replacing them so much as I have been finding new pieces, that were more appropriate to my current taste and aesthetic.

And what I have noticed is that lately I have been wanting things in a different way. I have grown up when it wasn't that we couldn't just afford to buy new, pretty clothes, but the clothes were simply not available. I did not know that designers existed. I wore the same brown woolen uniform dress (standard issue, and by "the same" I mean the same one dress, we didn't have duplicates) six days a week during the school year, so the sartorial exploration was neither an option nor a pressing issue. So my infatuation with fashion happened later in life -- starting just before graduate school, with short floral skirts and lace up boots, and waxed and waned with the trends. 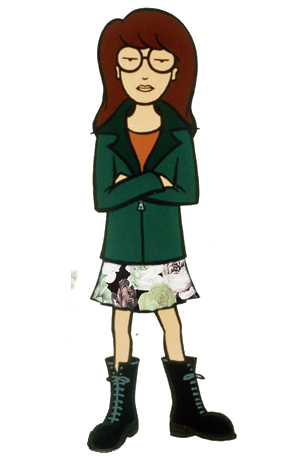 (Me, in grad school. The resemblance in uncanny!)

But as I am getting more and more entrenched in my forties, I find less interest in trends and high cache designer labels, and am drawn to smaller, more under the radar designers, who tend to augment the small volume with high craftsmanship. There also seems to be more artistic freedom in small indie operations (fashion as well as publishing), and that often translates into things that hover seemingly outside of fashion as it exists on runways and fashion magazines; maybe not timeless, but at least not as easily dated. I also find more value in well-curated boutiques with a small (ish) selection than in huge online outlets; and this, I think, is the thing that I am striving toward expressing: the point of view necessarily has to be narrow, and this narrowing, this doing-away with the superfluous, is what development of personal style is about. It is also about putting your money where your mouth is.

Man Repeller recently ran a great post on how "investment pieces" are really a scam: there is no return on that investment. Which is of course true: resell value of clothing is abysmal, and getting to wear something you bought is hardly dividends. That post makes a few keen observations on how the fashion mags keep selling us stuff calling it investment pieces which you will "treasure forever" -- a good thought but if it were true, wouldn't we all already be saturated with those pieces? If that how it worked, one's wardrobe would be set by the age of 35 or so. But of course there's novelty that keeps us shopping: "Have you ever purchased something that you said you’d wear forever? Probably. How long does “forever” actually last, though? If I’m being really generous, I’d give the perpetually-wearable piece in question three years before it’s rendered absolutely futile.

We are humans, we crave change," Medine writes. She is not wrong; but the impulses are not necessarily in contradiction. Craving change can be satisfied with a fairly static and even small wardrobe, I think; the trick is to have the intense love for each and every piece, and to find joy in curating one's closet as one would a collection -- culling ruthlessly, selecting sparsely.

One tendency that I often have to fight is the idea of multiple pieces: "I love this sweater dress. I wonder if I can find similar." It took me a while to recognize that multiples are a bad idea, because if I have a perfect piece, why would I wear its pale doppelganger? And after that, the only items I do have multiples of are white shirts (in different fabrications and with different collars that DO wear differently) and black pants (same).

So you can imagine my thrill when The Line (an online boutique with a brick-and-mortar counterpart, The Apartment) opened. Curated by Vanessa Traina, one of the fashion's more influential and, dare I say, interesting people. This is their raison d'etre: "Our vision stems from a desire to pare back, strip down, and pull together—the search for refined, versatile, and honest goods that come together in our New York City home, The Apartment. Built to last but never boring, these objects are a mix of established favorites and our latest finds from emerging names across fashion, home, and beauty. What unites these quintessential things is their staying power, the intention of their making, and how they work together in the context of a carefully considered life."

Yes, I know, it's just a fashion/lifestyle website. I know they sell an egg cup for $125, which is admittedly a steep price for an egg cup. But an object of art? Not at all! But as lovely as their home goods are, it's the fashion I want to talk about. So far, they have four clothing designers, and the selection is minimal in all senses of the word. And yet, I don't think I have ever seen a collection so closely aligned with my aesthetic and understanding what beautiful clothes are. Sure, Vince is everywhere, and Reed Krakoff is not exactly an unknown, but the emerging designer, Kate Wendelborn of The Protagonist, was the one who blew me away. Her clothes are sculptural, fluid, classic, unique, rendered in a palette of white, black and blush (with some cobalt blue). The textiles are exquisite -- I have seen such attention to fabrics in very few other designers, most notably Van Hongo (perhaps not surprisingly, both gravitate toward Japanese textiles). Basically, it is everything I love about fashion -- and I cannot help but imagine a wardrobe of such pieces, made new everyday by subtle, previously unnoticed details.

It is rare to find a designer that speaks directly to me; it is even rarer that I want to point at a website and say, "yes, this is exactly it; this is what I wanted to say the whole time." And to that effect, I will leave you with this:

"In a world saturated with stuff, mindless accumulation has become the default mode: a frenzied imperative to “stock up” rather than select with care, to layer seasonal “statement pieces” over disposable “basics,” and, from beneath a teetering pile of things, constantly start anew rather than build upon a firm foundation."

And this foundation is really what I've been seeking, style- and fashion-wise, lately. While I might not want to pare my closet down to a gleaming rack with ten hangers on it, I don't want my half of the closet clogged with multiple not-quite-right jackets and dull work-appropriate wear. I want to see each piece and hear clearly why I have it and why I should wear it today. While novelty and change are strong forces, so is knowing who you are. And I want to be able to say it without uttering a word.
Posted by Fish Monkey at 2:40 PM No comments:

Labels: credit where it's due, fashion, life, review

The Mammoth Book of Victorian Romance 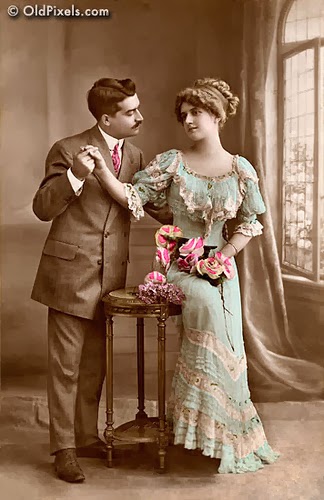 And at long last, I am ready to announce the lineup for my next anthology -- it's in the mammoth Book series, and I am pleased as punch to have a chance to work for such a prominent series. As the title suggests, the stories are Victorian in sensibility, and all feature romance in all its iterations -- from nascent infatuation to the horrible decay of a loveless marriage, from ghostly apparitions  to love that dares not speak its name, and of course a lot have quite a bit of fantastical elements mixed in. All but two stories (Caethe and Knight) are reprints, although Trent's piece has been significantly expanded from its previous iteration. Also I am including two classic Victorian shorts (Braddon and D'Arcy), because really, how can we talk about Victorian romance without providing some genuine period pieces?

So enjoy this brilliant ToC, spread the word, and buy the book when it comes out. I'll post the cover art once I have the final version (and the drafts I've seen are looking lovely.)

“Seeking Asylum” by Vivian Caethe
“A CHRISTMAS CARROLL: A Strangely Beautiful novella” by Leanna Renee Hieber
“Outside the Absolute” by Seth Cadin
“The Emperor’s Man” by Tiffany Trent
“The Lady in Red” by Eliza Knight
“Where the Ocean Meets the Sky” by Sara Harvey
“The Queen and the Cambion” by Rick Bowes
“The Dancing Master” by Genevieve Valentine
“The Tawny Bitch” by Nisi Shawl
“The Problem of Trystan” by Maurice Broaddus
“Irremediable” by Ella D’Arcy
“Item 317: horn fragment, w.illus” by E. Catherine Tobler
“Jane” by Sarah Prineas
“The Wide Wide Sea” by Barbara Roden
“Her Last Appearance” by Mary Braddon
“The Cordwainer’s Daintiest Lasts” by Mae Empson
“Waiting for Harry” by Caroline Stevermer
“Queen Victoria's Book of Spells”  by Delia Sherman
“Lamia Victoriana” by Tansy Roberts
“The Effluent Engine” by N. K. Jemisin
“A Kiss in the Rain” by O. M. Grey

Posted by Fish Monkey at 7:30 PM No comments: