For a while now, I've been noodling over the idea of dressing for your shape, as explained by many style bloggers and fashion gurus, and how that notion fits with two themes I've been talking about quite a bit lately: female shape and patriarchal control.

First, the notion of 'flattering' dressing, as practiced by What Not To Wear and its ilk, is pretty much predicated on the notion that the most desirable silhouette is a tall, slim hourglass. While this is indeed a preferred shape in our society, this is by no means the only shape, and while there are certainly benefits to looking like a tall slim hourglass, a sane person may choose a different silhouette for a variety of reasons.

Now, I'll focus here on the perceived silhouette rather than the esthetic preferences of the wearer -- mostly because the wearer's preferences are often subtly (and not subtly) shaped by reactions they garner. That is, I think it is perfectly possible for someone to like wearing a femme, 50's silhouette -- but at the same time "I just like it" is not entirely true. Clothes cannot be taken from their context, and our preferences have been shaped by other people and their responses, positive and negative, whether we like it or not. So rather than argue why we might like certain shapes, I would like to discuss on why we may choose to project certain shapes to those around us.

The choosing bit is especially important to me here. Because of course, it's possible to treat clothes as nothing but coverings for your body, and thus just go grab the first pair of pants on a rack and a random shirt and call it a day. But this is surrendering control -- that is, your clothes will still be sending messages, you just won't be in dictating it. Which to me seems like a bad thing, since you cannot opt out from the whole nonverbal communication in a patriarchal society thing.

So anyway. Evolutionary psychologists and the rest of the crowd that believes that 1950's in the US were the pinnacle of healthy and natural gender dynamics insist that hourglass silhouette is the one that men find visually pleasing (blah blah fertility blah visual cues blah we generalize things from the sample of American undergrads and assume their preferences by no means are conditioned blee) 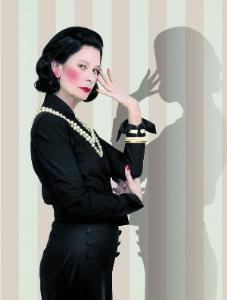 great post! it really fed my rebellious nature. fantastic points that i've always had in the back of my mind. thanks for the info.

I think my body is generally a shape/size that is considered "acceptable." But as time goes on, I choose to actively disguise my figure more and more. I love my body - it's not that I want to hide it from shame - I just find that accentuating it doesn't always align with my goals for the day or the situation. And the funny part is, even though I think it's pretty clear that I am intentionally dressing this way (I think, or hope, that I project an image of someone who actively thought about an outfit rather than grabbing random things in the dark), people will try to give me "advice" like, "that would be really cute if you belted it at your waist" or "that floats away from you too much, your figure is lost." And um, well, that is often the very point. But they just can't comprehend that I would choose to visually alter my body away from an "ideal."

made me laugh, and the summary is one I could pass off as my own style philosophy:

This is about as eloquent a discussion of why and how we should/could resist the normalising pressure to shape our bodies in certain ways as I have ever seen on a fashion blog. Thank you. I am following you now.

i loved reading this. . kudos to your strong, well-articulated opinions

Thank you for your kind words, Jenna and Devilishlypleasurable (love that name). Glad it was useful.

Poet -- glad it was funny. This is what evolutionary psychology articles sound like to me.

Franca -- thanks for the follow! I've been following you on Bloglovin for a while now, and enjoy your outfits.

And Kelly -- I know what you mean about advice. I try to be careful to a) never volunteer my opinions about people's clothes; b) if they ask, I start by trying to find out what was the effect they were looking for. If it was 'funky grandpa', telling them to make it into 'vixen' is a bit misguided.

Very impressive post. You're thinking outside-the-box about a subject most people don't really analyze at all; they merely conform.

In many contexts, I deviate from the norm and find that rewarding and smart. There's no reason it wouldn't also be valuable regarding clothes.

The end-point of your analysis is eminently laudable: urging us to be mindful and conscious about our fashion choices. Whether we conform or not, we should be making actual choices and not merely following "rules" or trying to look a certain way. Your effort to create awareness is really important.

What a great post!! I am a 50's silhouette lover actually and it specifically is because it flatters my figure. 50's style just seems to suit the way I look. I used to be into minis when I was slimmer as I was happier with my shape, now Im all about the knee length A-line. I definitely change my style to suit my body type and how confident I am with it at the time.
Daisy Dayz Home
Cross-Jones-Photography Home

This is wonderful. Thanks so much for getting so into detail about this important subject. I agree that we ought to experiment with multiple silhouettes - the norm can be so boring and forced!

Very well spoken indeed.
It becomes tiresome to hear about all of the clothes I shouldn't wear because they will make me stray too far from the ideal silhouette.

I was completely convinced, for YEARS that I couldn't wear a horizontally striped top.

But one day (after I started my blog and became jealous of other bloggers wearing horizontal stripes), I tried some on. I started small, just a cammi with thin stripes. But I quickly came to love them, and now I have tons of stripes. Today I wore a dress with huge horizontal stripes!

a year ago, I would have been convinced that such a dress would have made me look like a house, but today I believe I can wear what I like, and still look amazing, even if not standard.

Chic on the Cheap

Interesting post! In a spurt of fashion-blogging inspired enthusiasm, I got myself some waist belts and a couple of fuller skirts in the spring. I was really surprised by how much approval I got for making such outfits, even though they are "so not me". On a day to day basis I like lowered hip lines, hip belts, wide legs, gentle but not shapeless draping around the torso. I have an interest in looking good, but not much interest in looking "sexy", it wouldn't be appropriate in my daily life.

I used to really like watching What Not to Wear, until I realized that Stacy and Clinton dress every single woman in the same uniform. I guess it's useful for their audience/clients (women who dress frumpy or like slobs) because they seems completely lost - and in many cases it limits them professionally. But I totally agree that using clothing to project an hourglass silhouette is not the only option - nor should other people think it is.

I do agree and yet... I find it really unattractive when people wear t-shirt or something so tight that every roll of fat is delineated... (and we're not just talking fat people here, I'm reasonably slim and it happens to me). I don't believe I dislike it purely because it's a societal constructed idea that we should be slim hourglasses--it just isn't attractive in any way.

Other than that, I absolutely agree that dressing in flattering shapes is very limiting and annoying, and if I want to emphasize my derriere (or love the dress enough not to care), well, I won't care.

The notion of dressing for your shape pretty much homogenizes everyone, because everyone is trying to achieve the same look/"correct" body type. It's something that bothers me a lot actually, why is it that we all must look THE SAME? Why isn't it acceptable to look good in our own way, determined by our own standards?

This was an amazing post! You definitely entered something we don't often see on fashion blogs, and that's analyzing why we dress the way we do.

I agree that women's fashion is directly a product of the patriarchal male dominated society. Women's fashion was started by men and still men hold the majority in the fashion world. So men are dressing women the way they want and not the way women want.

I love to wear different shapes and silhouettes and I hardly ever wear skirts or dresses. And I wear all my pants baggy but fitted tops. I have a very awkward tomboyish style but I like it because it's different.

This was a really great post, and opened my mind to how much of a patriarchal construct "flattering dressing" really is.

This is why I love designers such as Margiela, who creates new silhouettes and shapes around the body. I hate 'rules' for dressing like you mention Trinny and Suzanna preech. I would have loved to see your rouged earlobes though!