FFB: Woman in Her Forties 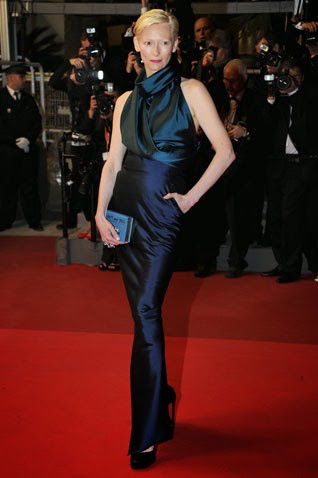 I know, I know. Quite a few assumptions here, but what I would like to focus on is the positives: the idea that as we age we not only acquire control over how we present ourselves to the world, but we also get to redefine what "looking good" is. Most of all, with all the built in assumptions, this saying resonates with me because I like getting older.

There was that thing about being young: I was unsure. I was easy to sway, I looked for male approval before female one, I fluctuated in my presentation to the world, I didn't know what I was. It is not uncommon for young people to waver as they try to discover themselves. And the issue of approval is I think germane to how we express ourselves via dressing.

Dressing for men is something women are encouraged to do: we constantly hear women's clothes being criticized as unflattering or unsexy, or what was she thinking, and she should show more skin, show off her waist etc etc. Anything to project an image desirable to a man. This is why I rarely have interest in clothes designed by straight male designers: they too often design for the male gaze, and I'm just not impressed. This is why I crack up at design competitors who break out "I bring a straight male perspective to clothing!" argument. This rare, precious commodity -- the straight male view!

There is another saying about women who dress primarily for other women. This is at least what I hear mentioned by the way of explanation of the harem pant-wearing, waist-concealing, sack-dressing fashion forward individuals. While (some) other women surely can appreciate such styling better than (most) straight men, this isn't all of the story either. Dressing in a way that is pleasing to oneself is important, sure; but so is sending a signal of "I do not dress for men". So that this dressing for other women thing? I think it often gets misconstrued as competitive, trying to impress each other. For me, I take it as a signal of "I do not value male attraction above all else." And as I get older, I see these women, and I want to be friends with them. Dressing for oneself OR for other women is a rebellion, since male gaze is such a default.

Now yes, there are plenty of young women who dress in interesting ways. But age does give one a few advantages in this area: first, there's knowing what you like after four decades of trial and error. Personal style evolves, at least for those of us who are interested in that sort of thing, and any evolution takes time. I know what I like now, and unlike when I was in my twenties, it is hard to persuade me to like things because everyone else does (not that I never change my mind, but.) Then there is an issue of income or at least patience: it is easier for me to save for high quality pieces I want rather than spend it all on shiny disposable trends. I do want to dress as a grown up, which for me translates into tailored, high quality garments. (If I ever have enough of vintage silk blouses and woolen blazers, I'll let you know.)

And finally, there is an issue of visibility. It's an old chestnut that women after forty become invisible in our culture. But invisibility also comes with lessening of the scrutiny female bodies are subjected to. Women over forty are often freer to experiment with personal style -- and many of the most amazing fashion icons, from Irene Apfel to Tilda Swinton to Helen Bonham Carter to Helen Mirren fall into this group. The social penalty for failing to cater to male gaze is lessened, since male gaze glosses right over women of a certain age, and... it's okay. After all, most of us spent most of our lives railing against the patriarchy. Now we get to do it from a different place -- from the place of strength and assurance, where our confidence is supported by a lifetime of achievement unrelated to our physical appearance, where our self-worth is unquestionable.

And I like it here, with the fabulously dressed women and timeless clothing. There is such a joy and freedom in finally knowing who you are, what you want, and what to tell those who don't like it. No longer at the whim of outside influence, we can find peace with ourselves -- and it is our doing.
Posted by Fish Monkey at 5:18 PM

I'm glad to hear you address visibility, which to me is one of the key focus points of beauty and appearance but isn't often talked about--possibly because many bloggers are culturally visible? I'm not sure. In any case: "Now we get to do it from a different place"--yes, yes, yes.