My Life in Clothes by Summer Brenner -- Review

I came across Summer Brenner's book, My Life in Clothes, due to a usual confluence of events: I blog about fashion a lot and my next anthology will be about fashion. When I mentioned it to Nick Mamatas, he introduced me to a bona fide fashion writer Summer Brenner – she just published her book of short stories with Red Hen Press. Of course, I asked for a review copy, and Summer was gracious enough to send one. 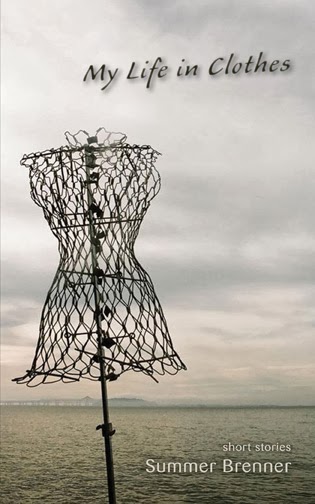 The stories here, strictly speaking, are more vignettes than short stories – if they were paintings, they would be small nature mortes, often built around a single vivid image, and sometimes not expanding past it. They draw from the past and the present, for the narrator's own life and her grandparents, and become fused in one cohesive meditation on history, personal growth, and their sartorial corollaries. In other words, it's a lovely book.

The premise, as the title indicates, is a simple one: each of the stories is built around a sartorial memory – clothes being sometimes central, sometimes peripheral, and memories of them often serving as a metaphorical hook to hang a story on. But they are always vivid, always honest, and story by story, the narrator's (author's) past unfolds, garment by garment: it's almost like helping a friend to sort through their closet and listening to them reminisce about each item. Of course, it's never as simple as that.

“Limping barefoot from the hall, I rested on Elaine's arm, strands of French twist falling, stockings ruined, my cousin's lavender dress stained, the rabbit cape askew. It had been the sweetest night of my life.” (From “The Dancing Shoes”) Not the best – sweetest.  Brenner's writing is concise and precise, words like paintbrush strokes, spare and assured. Memories so vivid you can smell them and taste their perfume on the roof of your mouth.

There's also a fair amount of humor in these stories. This is from “My Life in Clothes”: “”I never saw a girl who attracted so many boys.” <...>Edith's voice choked with admiration. She had conceived a blond, willowy wildcard in a gene pool that normally favored short, heavy, and mousy brown.” The gentle poking at relatives, the self-deprecation creates a particular warmth and a gentle counterpoint to the harsher, more revealing moments, because Brenner doesn't shrink away from ruined relationships or family dramas.

Indeed, the dominating feature of the book is its sometimes painful honesty. It ranges from the earnestness of a plain teen (“”Everyone says she'll be beautiful someday.” Someday made it sound like I existed only in the future.” (From  “The Red Beret”)) to almost mournful self-revelation of an adult in a failing marriage. Garment by garment, story by story, the author reveals more and more of herself, until you feel like you know her and would recognize her in the streets, if not by face then by her wardrobe.

And what a wardrobe! “On the rack of a hospital charity store, I found the very thing I needed: sheared raccoon. Its ugliness called to me. It cost ten dollars and weighed ten pounds. When real winter fell like an instrument of torture, I was prepared. I wore the coat every day and slept under it at night. It was a lifesaver.

“As the months dragged on, the coat began to fall apart. Pockets ripped, and the rotten lining tore. I left one cuff as a souvenir in New Haven. The other, I flung from the eighteenth floor of a New York Hotel.” (“The Spring Coat”) Well, you get the idea.

Intertwined throughout, are the stories of the author's relatives – grandparents, parents, cousins... “Psychic Shopper” tells a fascinating tale of cousin Peggy, who could select a perfect wardrobe for any client without ever meeting them. This unlikely tale is punctuated with accurate and hilarious observations, that ground it beautifully:

“
Never trust a man to describe a woman accurately
Men's impressions are generally vague
Men and women never agree on what's attractive
If men had their way, a woman would never cut her hair or wear loose pants.”

It is also worth mentioning that this book is not what you would call a fashion or personal style exploration. It is possible to be obsessive about clothing without putting forth any familiar signifiers, such as specific designers or styles. Clothes here are often plain, old, thrifted, borrowed, bought on a whim... their value comes from the associated experience rather than themselves. In that sense, this is the Velveteen Rabbit of fashion books – and well worth spending time with. It's now on sale at Amazon. If you love clothes, memoirs, and family histories, this book will delight you and possibly make you want to go shopping for vintage fur.
Posted by Fish Monkey at 12:28 AM