Why I don't blog about Red Carpets 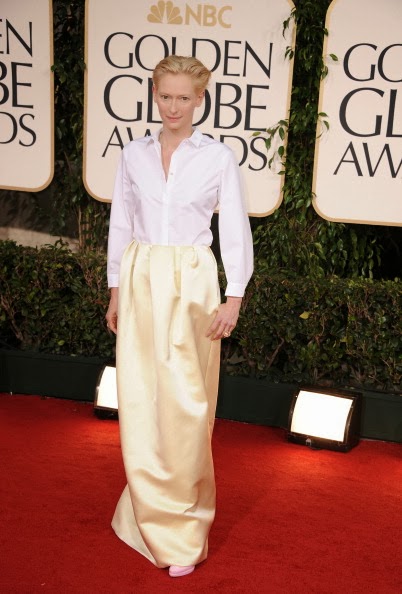 A few people asked me why don't I ever say anything about Red Carpet fashion, or celebrity fashion in general; and the reasoning is probably deserving of its own post, since Golden Globes just happened, and we had a thorough media coverage of all the pretty dresses worn by nice enough ladies. And I just don't consider that fashion -- or rather, this is such an explicit shill that I just can't bring myself to care. Basically, there are two issues at play: first, the designers who give away their dresses for free (to some of the very few people who could afford them), in order to make them into walking, occasionally talking, super-expensive billboards (it's not a secret to anyone that actresses do often get paid to wear certain designers, right? Right.) Billboards selling shit to us, people who cannot afford the dresses, in hopes that we'll remember the designer's name shopping for nail polishes, scarves, perfume and other revenue generators for luxury manufacturers. It's the tiny aspirational purchases that drive their profits, and it's the actors who help ignite the aspiring flame in us. So yeah, not interested.

The second aspect is what some call the Joan Rivers effect - the tendency to dress blandly and prettily and in the strictest conformity to heteronormative paradigm in order to avoid ridicule and being placed on worst dressed list and having Guiliana Rancic, as Tina Fey so eloquently put it last year, take a steaming dump on them. (Guiliana Rancic aside: I don't watch her show, so I have no idea of what that was in reference to, but in one of the show's promos, crying Guiliana says something to the effect, "But we're good people! Why are we being punished?!" Disclaimer: I neither wish harm on Guiliana Rancic nor do I believe that anyone is ever 'punished' in some vast cosmic justice sense, or deserves to be. However, a person who made a career out of ridiculing other women's bodies and dedicated herself to most fervent enforcing of patriarchal paradigm is NOT good people. Just saying. Anyway, long aside!)

So. Celebrities are so terrified that any hint of originality, personality or daring self-expression will lead to extensive media mockery (a justified fear, I may add, as Jessica Simpson and so many others well know), that their fashion choices tend toward safe. They hire stylists for fear that some uncontrollable bit of idiosyncratic taste will break through and spoil their otherwise unoffensive look. I mean, stylists only exists because there are so many grown wealthy women who cannot dress themselves, even with all the free designer swag thrown at them because they're worried that Fashion Police will take issue with the size of their earrings or unorthodox shoe choices.

So we're pretty much left with Tilda Swinton (pictured above), who is seemingly the only person left in Hollywood who knows she is awesome enough not to care, and Helena Bonham Carter who has the whole crazy avant-garde look down (her dress choices are routinely described as 'wacky' by people who seem to think it's a bad thing. She also wears Vivienne Westwood a lot, and can I just say how jealous I am?) Both of these actors routinely end up on various fashion faux-pas watchdog lists; I just hope that they will continue not to care. Wake me up when the rest of celebrities stop caring and fire all their stylists; meanwhile, I'll be perusing fashion editorials and street style blogs, because red carpet to fashion is like a burger joint to a petting zoo. Fashion is about self-expression, something that simply doesn't exist here.
Posted by Fish Monkey at 11:56 PM

My thoughts exactly. I have often considered blogging about awards show "fashion", for a split second, after the fact, but as you point out, the temporary blip in my pageviews is just not worth it. God bless Tilda and Helena.

You're right. There is just so much coverage in the media on the Red Carpets as it is.

Like what your thoughtful awareness of the celebrity-designer relationship- and how it affects us.

Allie -- indeed! It would be so boring without them (well, and Helen Mirren who's just awesome).

Judy -- thank you! I really wish there was less obsession with Red Carpets -- maybe then celebs would dare to do something interesting.

I soo agree. I dont cover it either for exactly those reasons. I blog about and love japanese fashion because its soo original im not a fan of hollywood fashion in general.

Oh when my friends were watching the golden globes and commenting on the dresses I was like yeah I guess its a fashion statement but its just not relevant to the daily person. You're absolutely right. I think watching those events is really just an excuse to look at pretty clothes.

I was so furious with that 'show' Fashion Police, I almost threw the remote at the TV. 4 people, judging and making snide remarks about people that dared dress outside the norm, and calling stars that are currently A-list 'best dressed' regardless of what they were wearing.

E! should not be allowed to make fashion-related shows unless they hire real fashion people.

I will admit to watching Fashion Police occasionally but I tend to disagree with them a lot. Plus, I've noted that the better I think of an actress (like Helena B.C.), the less Joan thinks of her clothes.

They've even contradicted themselves on people (like Johnny Depp) after they make a good movie. First he was a hobo, now he's hobo chic??

I would be nice to see more stars making a statement about their style not just a fashion statement.

You are so right about Helena Boham Carter making us jealous by always wearing Vivienne Westwood... so true!! if only the rest of us could!

I for one think red carpets have become boring and only useful for those magazine features of worst and best dressed and so on. It has hardly any reference to real style, and it is, as you said, a form of advertising, that is all. Pretty, overdressed, walking ads.

Great post. Great voice. Will be back for more :)

Thank you for your comments, everyone! Really glad to hear I'm not the only one giving the stink-eye to that particular ritual. And yay for all the Bonham Carter love!

The only thing that I can say about red carpet is some celebrity look hilarious to some of the dresses that they are wearing. When I watch the news I just laugh because they are terms that media people name them like the worst dress a celebrity wore.